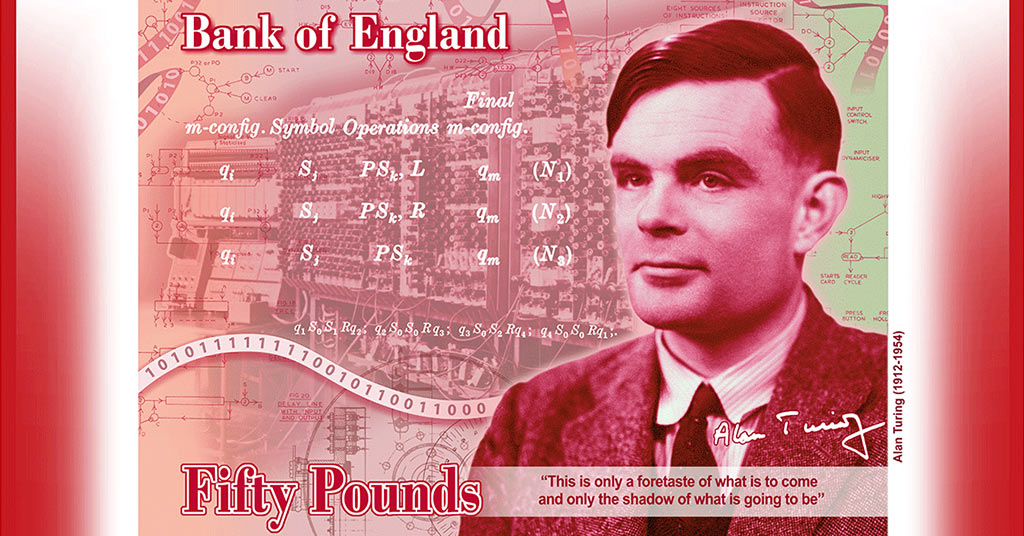 Today, Bank of England Governor, Mark Carney, announced that Alan Turing will appear on the new £50 polymer note. Making the announcement at the Science and Industry Museum in Manchester, the Governor also revealed the imagery depicting Alan Turing and his work that will be used for the reverse of the note. The new polymer £50 note is expected to enter circulation by the end of 2021.

Alan Turing was chosen following the Bank’s character selection process including advice from scientific experts. In 2018, the Banknote Character Advisory Committee chose to celebrate the field of science on the £50 note and this was followed by a six week public nomination period. The Bank received a total of 227,299 nominations, covering 989 eligible characters. The Committee considered all the nominations before deciding on a shortlist of 12 options, which were put to the Governor for him to make the final decision.

Alan Turing provided the theoretical underpinnings for the modern computer. While best known for his work devising code-breaking machines during WWII, Turing played a pivotal role in the development of early computers first at the National Physical Laboratory and later at the University of Manchester. He set the foundations for work on artificial intelligence by considering the question of whether machines could think. Turing was homosexual and was posthumously pardoned by the Queen having been convicted of gross indecency for his relationship with a man. His legacy continues to have an impact on both science and society today.

The new £50 note will celebrate Alan Turing and his pioneering work with computers. As shown in the concept image, the design on the reverse of the note will feature:

The full note design including all the security features will be unveiled closer to it entering circulation.