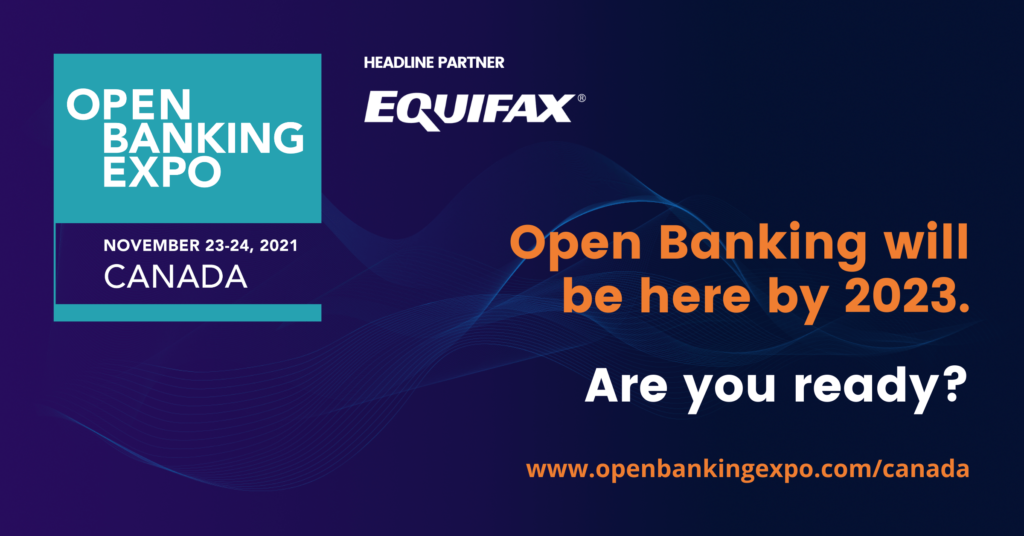 Open Banking Expo, the leading global community of Open Banking and Open Finance executives responsible for digital transformation across financial services, will return to Canada for a third year this November.

Once again with Equifax Canada, Canada’s leading trusted consumer data provider, as its headline partner, a two-day virtual event will bring together financial services and fintech innovators, visionaries, and disruptors who have been trailblazing consumer-directed finance since the event launched in 2019.

We are thrilled to be able to bring together the industry, especially at such an opportune time as the Canadian Government’s Advisory Committee published its Final Report on Open Banking setting out the road map and timeframes for its implementation. While still at the beginning of the journey, Canada boasts a growing community of Open Banking and Open Finance pioneers working to bring consumer-directed finance alive for consumers, small businesses, and the wider financial services sector. And we are proud to play our part in supporting this movement, which the line-up and agenda for this year’s event aptly reflect
Adam Cox, co-founder of Open Banking Expo

We are proud to partner with Open Banking Expo for the third year in a row. The Expo is a powerful platform for industry leaders to share their insights and discuss the future of Open Banking in Canada, especially in light of the latest Government Report and its Recommendations to bring the benefits of Open Banking, such as data transparency and financial control, to Canadian consumers
Sue Hutchison, President of Equifax Canada

The program is now live at www.openbankingexpo.com/canada.

Hundreds of C-level and senior-level delegates from across the financial services sector are expected to attend and exchange ideas and insights on the future Open Banking roadmap and what a “made-in-Canada” approach to its implementation will look like.

Headlined with an Open Keynote from Bill Morneau, Senior Fellow at Jackson Institute and former Finance Minister of Canada, the event will strike a healthy balance between debates, keynotes with industry overview, analysis and opinion on topics ranging from the role of Open Banking in the post-COVID-19 recovery and the security and privacy debate around data, to commercial opportunities for small businesses and what Open Banking means for Canadian consumers.

Some of the speakers include:

While some say Open Banking in Canada has had a very slow start compared to other regions, it has recently had a big shot in the arm following the release of the Final Report by the Canadian Government’s Advisory Committee on Open Banking, which recommended the Open Banking framework be defined and implemented by January 2023.

The Open Banking initiative will enable consumers to give their consent to the secure sharing of data with service providers such as banks, credit unions, wealth management firms, and fintechs.