Home > Economy > Why might Russia not be able to pay its debts?

Why might Russia not be able to pay its debts? 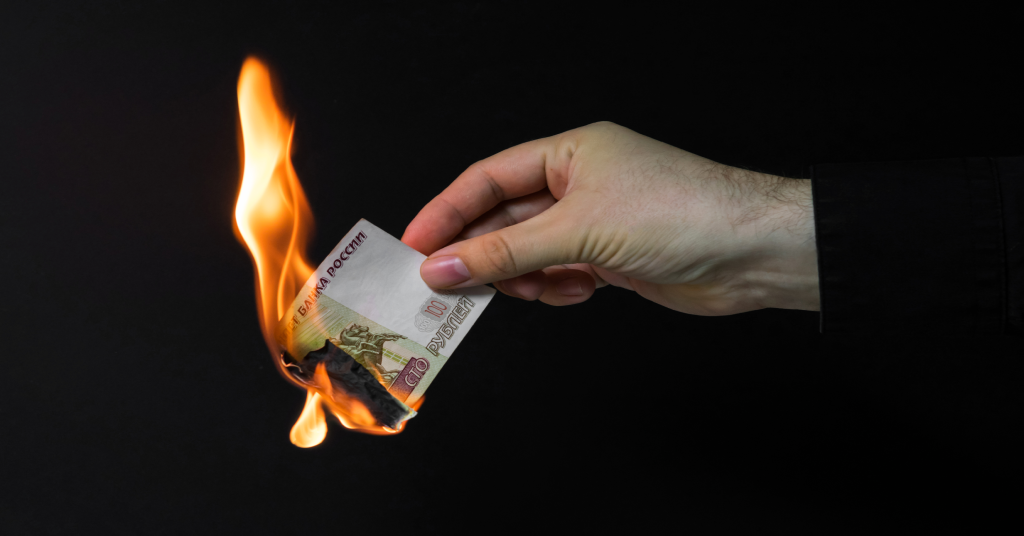 Why might Russia not be able to pay its debts? Source: depositphotos.com

There is much speculation today whether Russia will default on its foreign debt or not. Although the inability to pay is not as certain as some politicians state, doubts about Russian solvency have objective reasons.

Default or not default?

On Monday, credit ratings agency S&P declared that Russia had defaulted on its foreign debt, offering to pay it off in rubles instead of American dollars. Namely, the aggressor state attempted to pay in its local currency for two dollar-denominated bonds that matured on April 4. The total worth of those bonds is $649 million.

According to the agency, it means a “selective default” since the offer concerned a specific obligation rather than the country’s entire debt. At the same time, such a repayment cannot be accepted as investors are unlikely to be able to convert the rubles into “dollars equivalent to the originally due amounts.”

In response, Russia’s finance minister, Anton Siluanov, said Russia will do everything possible to make sure its creditors are paid and threatened to take legal action if Western leaders try to force the country into defaulting on its foreign debt. The country still has a 30-day grace period to make the payment.

The bonds in question were issued under English law, which allows a borrower to defend its inability to pay off by claiming that an external force made it impossible to honour obligations. If the case is proven, the court may postpone the payment.

Technically, the US Treasury did block the transfer, preventing Russia from using any of its frozen foreign currency reserves to service its debt. This action was part of the sanctions package applied to Russia after it started an unprovoked and unprecedentedly brutal war against Ukraine.

Since the war started, foreign currency reserves held by the Russian central bank at US financial institutions have been frozen. Nevertheless, the US Treasury Department has been allowing the Russian government to use those funds to make coupon payments on dollar-denominated sovereign debt on a case-by-case basis. This time, the transfer was intentionally blocked to force Moscow to make the difficult decision of using dollars it still has access to for payments on its debt rather than for other purposes, including supporting its war effort.

Can Russia cover its debts without the frozen reserves?

Now, let’s get down to some simple maths. Russia’s gold and foreign currency reserves equal $640 billion. Roughly half of those funds are frozen by the US banks. The other half is available for use.

Russia’s total public debt stood at about 21 trillion roubles ($262 billion) at the beginning of the war. Of that, about 4.5-4.7 trillion rubles ($52 billion) were external liabilities that require repayment in dollars and euros (about 20% of the whole public debt).

Although the amount is easily payable from the remaining reserves, let’s not forget about Russia’s other expenses. War doesn’t only take lives, it takes a lot of money to continue.

According to a recent study, conducted by the Centre for Economic Recovery, CIVITTA and EasyBusiness, the daily cost of the war in Ukraine may exceed $20 billion for Russia. Since the war has been raging for 48 days, the approximate expenses to carry out Putin’s mad plan would equal $960 billion. It is clear that the cost includes already made military equipment, missiles, weapons, etc. However, all these assets need substitutions, they are not limitless. Hence, it’s easy to calculate that the unfrozen reserves in Russian possession would pay only for 16 days of the full-scale war in the neighbouring country.

Perhaps, Western countries believe Russia has exhausted some of its reserves to finance the military actions. However, the aggressor state has plenty of assets besides the above-mentioned gold and foreign currency. It’s neither a poor nor a heavily-indebted country. Its public debt is less than 20% of GDP. Russia deliberately reduced its dependence on global capital flows after the first sanctions were imposed in 2014 following the Crimea annexation.

Apparently, there are still countries or at least illegal organisations ready to accept payments in rubles or alternative assets. For instance, lots of RPGs and anti-tank missiles, as well as Brazilian-designed rocket launcher systems, have been dispatched to Russia from Iraq with the help of Iranian weapons smuggling networks.

Besides, European Union sanctions don’t touch most of Russia’s lucrative oil and natural gas exports which are a source of a steady new income. In 2021, Russia’s sales of oil and natural gas accounted for 36% of the country’s total budget. Moreover, the country expects to earn 798.4 billion roubles ($9.6 billion) in additional revenue from energy sales in April due to high oil prices. This money from exports is definitely not received in rubles. It’s also questionable whether the income goes to the “frozen” accounts or not.

Therefore, the chances that Russia will default on its debts are slim, as long as Europe is still buying its oil and gas.