GlobalData says that as long as cash is slowly becoming less relevant, hacking someone’s bank account will become more of a daily deal. Although more people use devices to manage their finances doesn’t mean that physical money or ATM machines will stop existing.

One constant trend to observe is the fact that both the Older Generation and Gen Z are much more prone to being the victims of confidence tricks than other generations. Regardless of how knowledgeable they might or might not be, people who are either very young or very old still seem to be more trusting than others. Older generations are also more vulnerable to being defrauded at merchant locations through skimming techniques, i.e. where a merchant charges more than the actual price of a product
Vlad Totia, Payments Analyst at GlobalData

The research reveals that fraud will naturally go to the point of least resistance as long as encryption and security techniques are remaining complex. 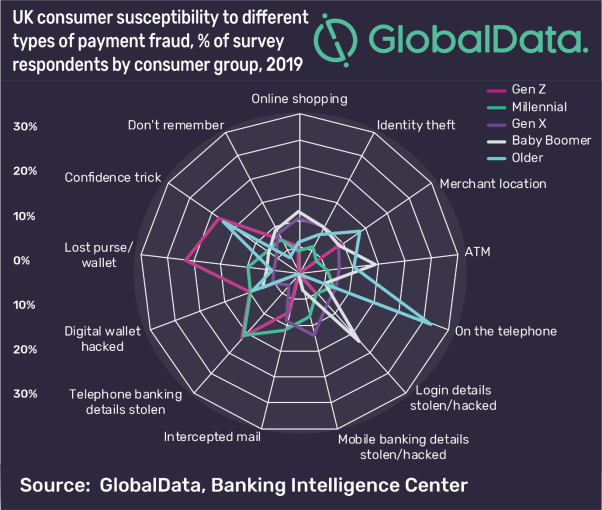 The chart presents various consumer groups’ vulnerability to different kinds of online banking fraud, with Generation Z most susceptible to losing their purse or wallet.

Millennials consider having their telephone banking details stolen as the biggest vulnerability, sharing the proportion with Gen Z.