Every day from the media we are learning the news about once powerful and world-famous brands that close stores, carry out massive staff cuts, or completely shut down the business and file for bankruptcy. During several conferences at the end of 2019, I presented my analysis of the poor financial results of neobanks. The well-known neobanks in the world differed from each other solely in terms of the negative financial result in the line “Net profit per client”. Looking at the evidence of business bankruptcies in various areas, I decided it is the right time to have a closer look into Fintech-players during quarantine to see how they survive the coronavirus stress test.

The main trend is obvious: global quarantine stimulates people to vote for contactless and digital solutions. Looks logical, that even the most conservative customers of incumbent banks, being in self-isolation mode, will want to use convenient online services offered from fintech startups. Neobanks are flexible and fast, they do not suffer from the “legacy” of IT systems and enormous staff, therefore, they have low costs. In addition, the global digitalization trend helps neobanks to win new customers. Plus the pace of transition to online has now increased many times.

Fintech: what is the impact of quarantine “storm”?

Just after the launch, the neobanks Revolut and Starling completely changed the way people bank. Monzo from the UK set the market at fire, bringing in half a million users even before the actual launch. 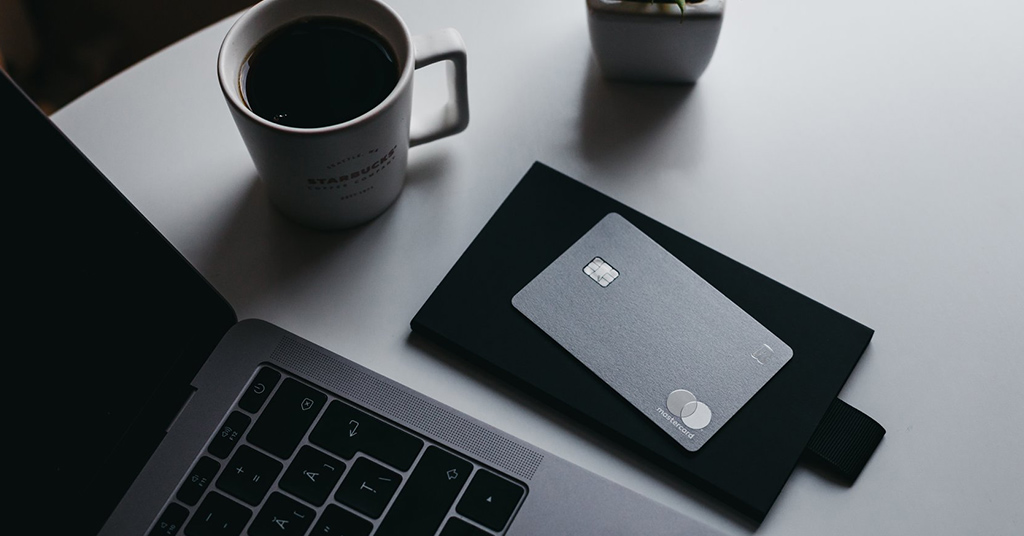 Just a few months ago, the banking community was actively discussing an investment of $433 million in Australian neobank Xinja. The bank had not yet started lending offering actively and therefore was not particularly worried about the quarantine impact. In addition, German N26 successfully attracted an additional $100 million from its existing investors. And Revolut, with its 10 million customers, in February 2020 has successfully raised $500 million funding.

Does this mean the Fintech survived the storm? Most of the standalone neobanks are backed up by venture capital and investment funds. How do you think will investors behave during a crisis? How do they typically behave in total uncertainty? Most probably they will delay the spending decisions and switch to the low-risk assets, which neobanks are definitely not. To support this idea with the numbers – here is the example: in the first quarter of 2020, fintech attracted $5.78 billion in investments, while in the fourth quarter of 2019, investors were much more generous – $7.77 billion of the invested money which is a drop-down of 25% QoQ.

Are neobanks able to cope on their own? It depends on their financial strength. Most of them still are in a loss and therefore constantly need financial refueling. With no cash top-ups, many of the neobanks will not survive.

Will fintech startups survive in low-income and low-margin environments while keeping costs to a minimum?

In order to understand more about the uncertainty and unexpected swings due to COVID-19, let’s have a look at the Australian fintech player Afterpay. The company offer is shop now, pay later – installments for your purchases. The nerves of its shareholders are made of steel and here is why. In the midst of quarantine in March 2020, the company’s market valuation was estimated at $11 billion and within just one week it literally collapsed to $2.3 billion. The price per share fell from $40 to a record low of $8.9. According to Morgan Stanley’s report, Afterpay is losing 40% of the profits, and a double increase in bad debts is expected in the coming years. However, on the 10th of July 2020, the company’s shares were trading at $74.6 per piece. This means that if on March 23, 2020 you bought shares of Afterpay for $1000, then on July 10, 2020, the amount would increase to $8400. Moreover, Afterpay is going to raise another $800 million of funding in order not to lose momentum. 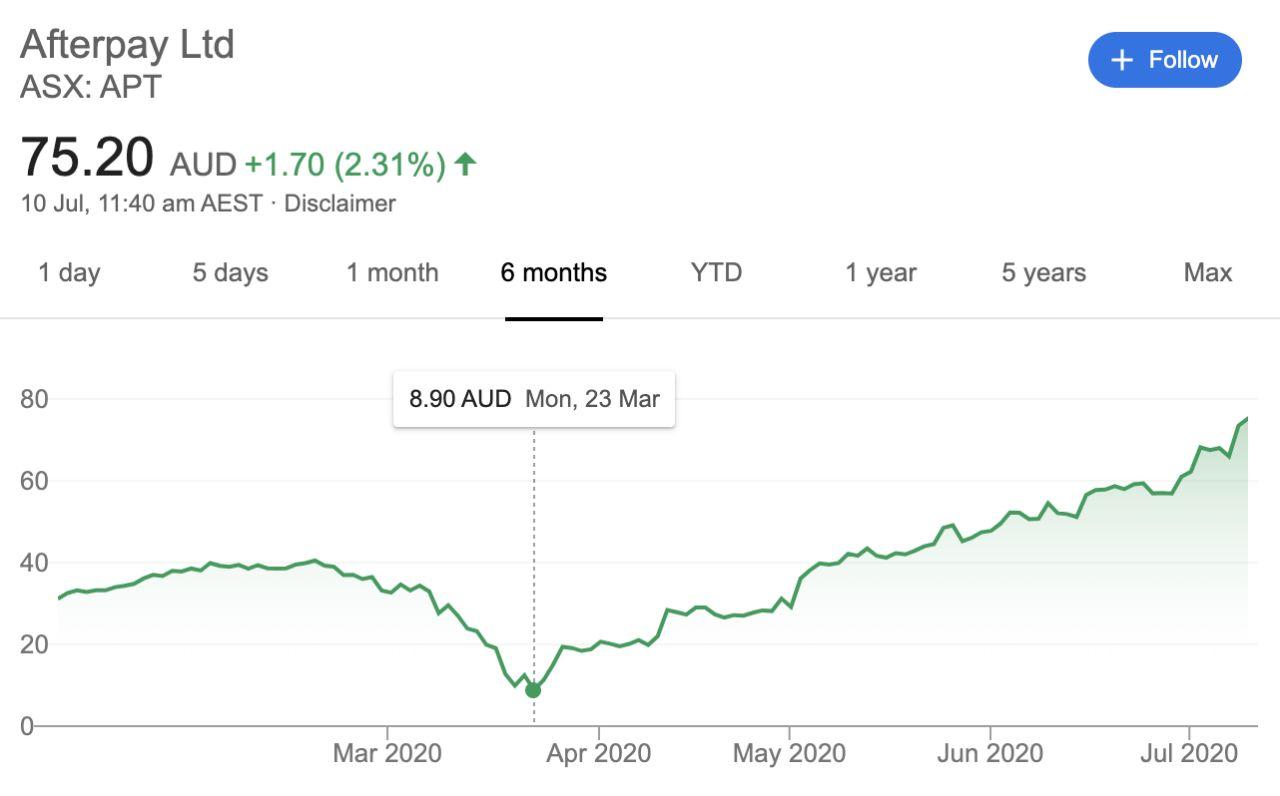 Here’s another example for you – due to quarantine, the value of Prospa shares went all the way down to 40 cents in March 2020. Now they are trading at $0.98 per share. The company has lost 73% of its value. Prospa’s target audience is small and medium business lending. It is this business segment that has suffered the most in quarantine. Most impacted were tourism, cafes, beauticians, gyms and clothing stores. 20% of all customers are on a partial repayment mode, 13% – are on full deferrals. The company has reduced its operating expenses by 32% and is revising scoring models. At the same time, Prospa had a very strong financial position going into the quarantine.

Neobanks often use the “Facebook strategy” – this means massive customers acquisition, offering them the services literally for free. And then somehow later this client base can be monetized – either through additional services or premium services. Moreover, neobanks execute this strategy with no stops until they will reach global world dominance. This looks like a long way more to go for any of the neobanks in the world.

The most popular business model of the neobanks is freemium – this is when the basic functionality is offered for free, but you will have to pay for additional or premium services.

The strategy of rapidly expanding the customer base is working for Neobanks’ benefit – European neobanks alone have attracted 20 million customers from incumbent banks. 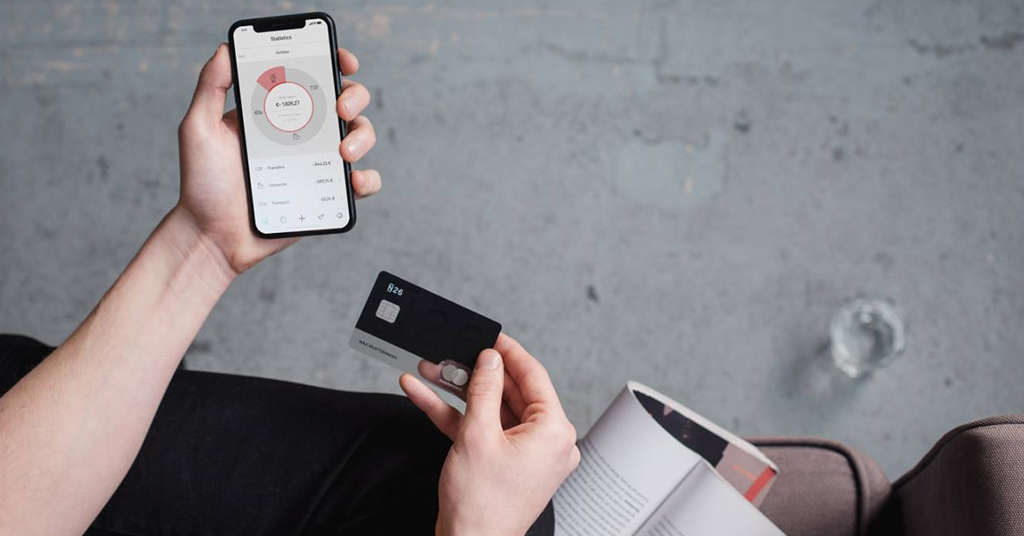 A German N26 is known to layoffs of 10% of the personnel in the United States. Source: facebook.com

In pursuit of new customers, neobanks often play dangerous games: the highest interest rates on deposits and the lowest rates for lending. However, most services are generally provided for free. All of this is targeted at high-speed customers acquisition. And interestingly, the growth rate of the client base of neobanks is simply incredibly high and incumbent banks continue to lose their market share. What is even more interesting is that it works also vice versa: the more customers a neobank has, the bigger its losses. In terms of profitability, neobanks are not in the right place.

In addition, more and more new fintech startups pop up constantly offering customers all the same services and competition grows too quickly. Among the other failures is that neobanks are trying to attract cash from their clients at rates far above the market. Clients in quarantine behave almost like investors. They massively transfer their money to large banks, where they believe it is safer. Clients believe that traditional banks are more reliable and have better guarantees of safety and security. Clients try to minimize their risks and actively place money in large traditional banks. It is believed that incumbent banks are safer, have better financial strength and stability, and are also protected by various government programs. It turns out that attracting deposits, which was already a difficult task for fintech players, has become even more difficult.

At the same time, Revolut announced the dismissal of 60 employees during the quarantine period to reduce costs. In total, about 2,200 employees work for them. A German N26 is known to layoffs of 10% of the personnel in the United States. In total, the bank has about 1,500 employees.

A vivid illustration of the reaction of customers to neobanks during quarantine – a drop in downloads of their mobile applications – by an average of 28% monthly compared to February of this year. Monzo from the UK had a 36% drop in app downloads. 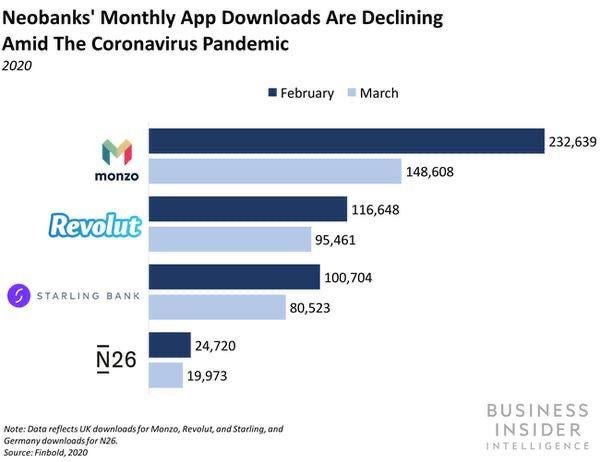 Customers in times of crisis and uncertainty try not to make sudden movements to change their traditional conservative banks, and generally trust them much more than neobanks. This can be backed up by the fact that in the 1st quarter of 2020, in the USA, legal entities and individuals entrusted $1 trillion to traditional banks. This is an incredible surge when compared with the previous quarter, in which banks raised only $260 billion. In addition, the most stable and largest – the well-known four banks (Chase, Bank of America, Wells Fargo, and Citi) – accounted for more than half deposits from a trillion dollars invested. This once again confirms that customers considered the size of banks and their reputation as key criteria in the matter of the safety of their money.

All of the above is still not the whole list of the reasons why the Fintech is bleeding. Neobanks often focus on a narrow niche product – that is, customers cannot select any card from a wide range, and, of course, not all banking products are available. But more importantly, neobanks do not have an offline presence. You have nowhere and no one to solve your difficult financial issues. And without such an opportunity, it is difficult to build trust between the client and the bank, which is especially important when people find themselves in a challenging situation with much uncertainty.

A separate headache for neobanks are bad debts. After all, many customers lost their jobs, and the level of unemployment is on the rise.

Will new players survive such a tough stress test? After all, they have not had such an experience before… 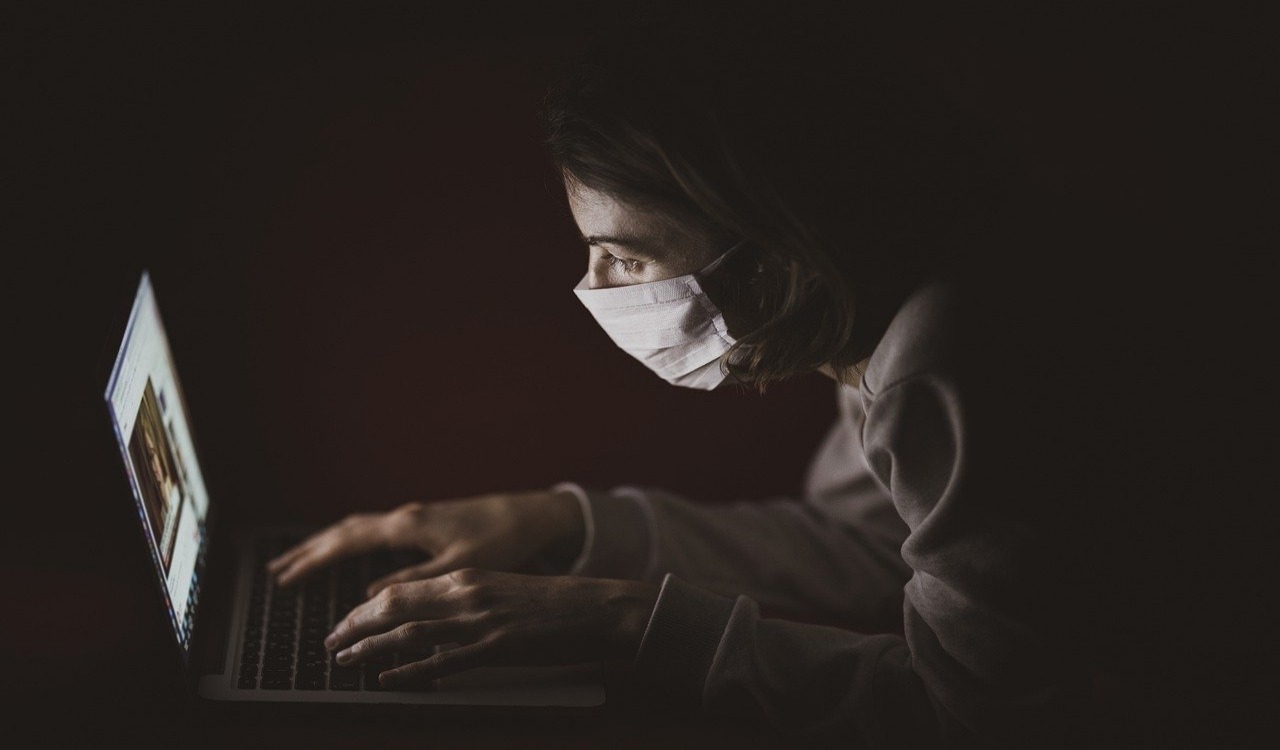 In the context of decreasing interest rates on loans, the reduced purchasing power of people due to rising unemployment and increased confidence of customers in traditional banks, it will be very difficult for neobanks and fintech startups to survive the coronacrisis. Let’s stay tuned.

Anastasiya Shevchenko is a general manager of Lugera Ukraine, independent fintech expert, author of the book “Digital Era”, and co-owner of the Fintech Marketplace Let’sPartner.