French e-commerce is expected to grow by 12% this year

E-commerce in France will reach 104 billion euros in 2019

French e-commerce is expected to grow by 12% this year. Source: shutterstock.com

This is one of many findings from the Ecommerce Foundation. This year, it will probably be the first time since 2014 that the growth rate of French e-commerce will be below 13%. 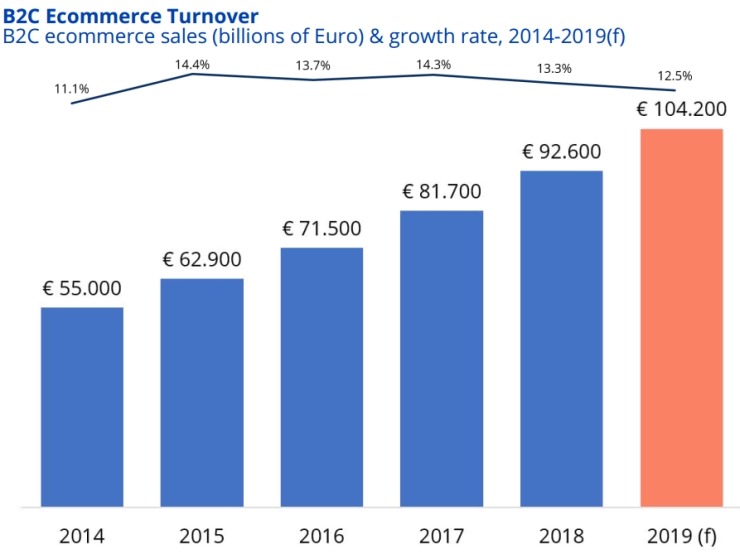 The share of internet users in France having shopped online is expected to stay the same as last year, and comparable with previous years: the expectations are that 75% of the population will have shopped online at the end of this year. The annual amount spent per online shopper will increase though, from 2,126 euros last year to a predicted 2,346 euros this year.

According to the study by Ecommerce Foundation, Amazon is the leading online retailer in electronics and media. The e-commerce giant accounts for almost 1.2 billion euros in sales in just this sector. That’s significantly more than other big electronics and media retailers in France, such as Apple, Cdiscount, Fnac and Auchan.

When French online shoppers got the question of how they prefer to have their ordered products delivered, 86% choose for delivery at home, while 83% like to have the items delivered in relay points. Almost four in ten (38%) like to collect products at the store, while 24% went for picking up the item and paying for it at the store. Also, 13% prefer to have items delivered at work, while 9% like to send the parcel to a locker station.

Most French shoppers prefer to pay for an online order by using their bank card. This was the most preferred payment method for 80% of shoppers. Online banking (11%), consumer credit (4%) and bank transfer (1%) were the other popular online payment methods.

Most foreign visitors to French online shops are from the United Kingdom (18%), followed by Germany (16%), Spain (5%) and Italy (4%). Meanwhile, French consumers like to shop domestically. Last year, 60% of them shopped at French shops, while 36% shopped both domestically and cross-border and 4% only shopped abroad.

SEE ALSO: E-commerce in Germany to be worth almost 60 billion euros in 2019