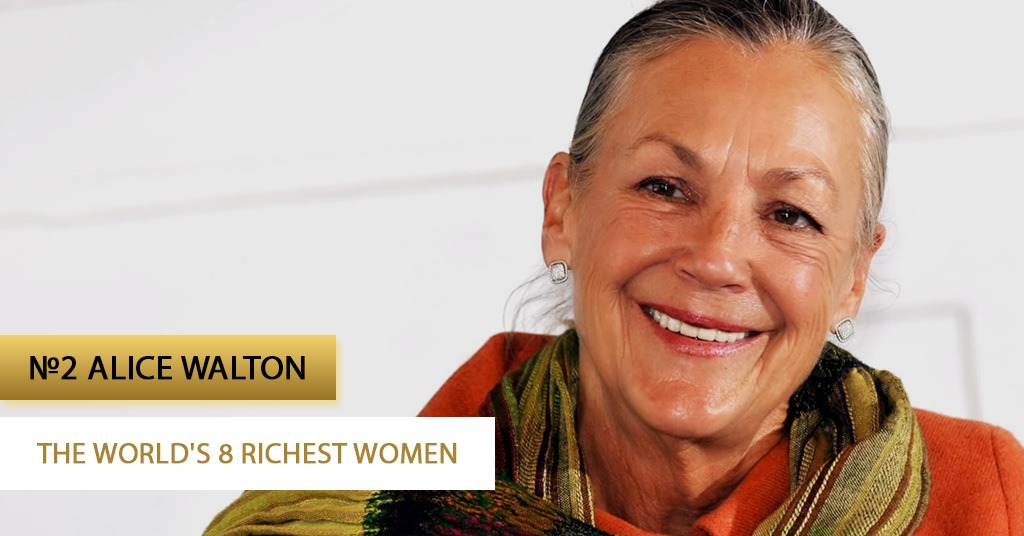 Our today’s heroine takes second place in the rating of the richest females on Earth.

Alice Walton, with her $46 billion, takes second place in the rating of the richest females on Earth. Guess what? She is an heiress too. This time, her family business is the famous Walmart, Inc, which is the largest grocery retailer in the USA.

Alice is the youngest child and the only daughter of Sam Walton, the founder of Walmart. While her brothers became involved early in the retail business, Alice grew fond of arts. She has a multi-million-dollars personal art collection and strives to promote art into the masses. In 2011, she opened the Crystal Bridges Museum of American Art in Bentonville, Arkansas where she serves as the chairman. She is also on the board of the Walton Family Foundation which donates funds to economic development, education, and environmental campaigns. The foundation also hosts a Christian summer camp called Camp War Eagle. It offers many activities to children from all walks of life, as well as gives scholarships to the needy. Before those activities, Alice was mainly involved in the sphere of finance. She even opened an investment bank in the 1980s. However, it didn’t last long.

Alice is quite conservative and was a fervent financial supporter of George W. Bush during his presidential campaigns. She likes nature and has a few ranches with big territories where she breeds horses. She shies away from publicity. There were a few scandals in the mass media featuring her name. The first one regarded her car accidents in the 1980s. In one of them, she hit a pedestrian who subsequently died from injuries. Allegedly she was driving drunk. However, the judges assigned only financial penalties which were not significant for one of the richest women in the world.

Other negative mentionings of Walton’s family directly dealt with their Walmart employees. They expressed their dissatisfaction with low wages. Considering the wealth of the founders, the employees felt they should care more about their personnel. The largest US business pays workers so little that many of them are forced to apply for additional government assistance. Many of them can’t afford to pay their rent. Moreover, the company opposes the organization of any workers’ unions. There were numerous protests and strikes in recent years. Some protesters were arrested or fired. As a result, Walmart slightly increased the minimum wage. However, the biggest employer nationwide were not going to lose billions of US$ in revenues by giving decent living wages to all their staff. Instead, they tried cutting costs by exploring online retail models.

All in all, many people blame the Waltons for gaining their wealth by outright exploitation of human resources. Many economic experts, however, doubt the reasonability of increasing wages. Firstly, it will also increase the price of goods. Less affordable products may lower sales rates. This, in its turn, will lead to a corporate budget reduction, fewer stores, and fewer employees. In addition, low-skilled workers and students will lose their chance to get jobs at Walmart. The higher the pay, the greater skills will be required. Some experts predict it would be more profitable for the company to replace low-skilled processes by automatic technologies altogether. Increasing payments is possible only by changing the whole business model. However, it is still not clear how that could influence the national rates of employment and poverty.