Home > Retail > What is the story behind Tesco?

What is the story behind Tesco? 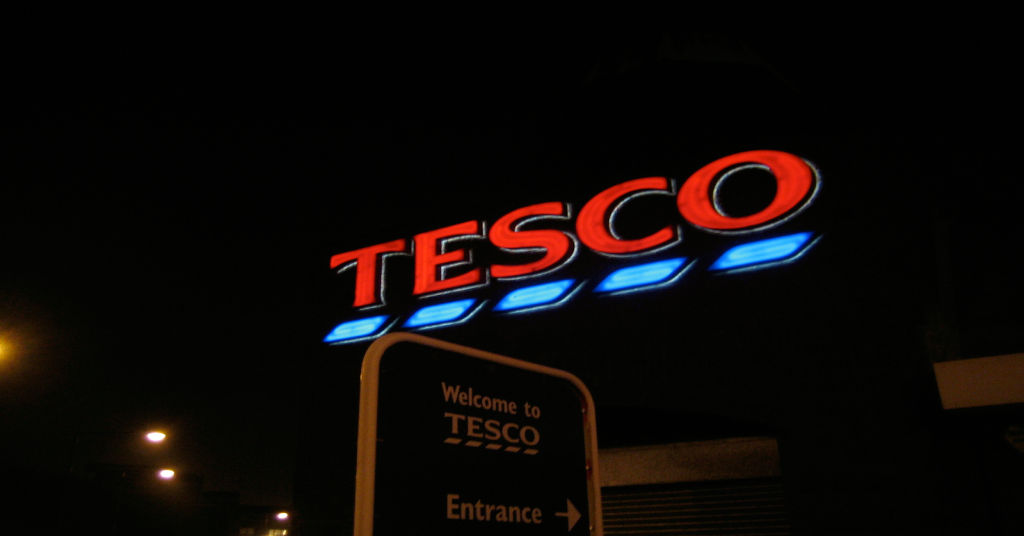 What is the story behind Tesco? Source: flickr.com

Over a hundred years on the market have made Tesco the undisputed retail leader in the UK, and one of the most profitable grocery chains in the world.

The name Tesco stems from the first own-brand product sold by the company’s founder – Jacob (Jack) Cohen. Born in a family of a Jewish tailor, Jack became his father’s apprentice in his teens. However, the job was not to his liking. Having served his military duty, 20-year-old Cohen returned from the war.

With a true entrepreneurial spirit, he spent all his demobilisation money on surplus army stocks and groceries for sale. A stall in the East End of London became his first trading venue. The initial assortment was quite scarce: army surplus, fish paste and golden syrup. Nevertheless, the first day brought Cohen a profit of £1 and the willingness to continue.

It was on the market stalls that Jack Cohen developed his first, and best-known slogan — “Pile it high, sell it cheap”. This strategy presupposes buying limited numbers of products in large volumes and selling them at discounted prices. Affordability was a key shopping factor in the post-war time. Thus, Cohen’s business has eventually grown to a number of wholesale stalls.

Jack ordered tea for sale from TE Stockwell who was a partner in the firm of tea suppliers. His initials – TES – plus the first letters of Jack’s last name – CO – gave the future retail giant its name, even before a little grocery store became a brand.

For the first ten years, the wholesale grocery business was striving and gaining scope. Meanwhile, Cohen got married. His wife Sarah (Cissie) Fox supported her husband’s business aspirations. The couple invested all their savings into the business expansion, allegedly including even the wedding gifts money. The first branded Tesco store opened in Burnt Oak, Edgware, north London in 1929.

The next decade of Tesco business was characterised by rapid expansion. Cohen bought a plot of land in North London to build a corporate headquarters and warehouse. It was the first modern food warehouse in the country. The businessman also bought or rented a lot of store premises. Many of them were in newly-built shopping centres both in London and nearby counties. Cohen was never afraid to be the first to sign the contract with a shopping mall, and made efforts to attract other sellers there. It made centre owners also willing to help him with the startup costs. By 1939, there were already about 100 Tesco stores across the UK.

As World War II started, Tesco introduced rationing rules, limiting purchases to a fixed amount of basic food supplies. This selling principle aimed to show that all the customers were equal. Whether rich or poor, everyone deserved their portion of bread or tea. The same initiative was later introduced by the government nationwide.

After the end of the war, Jack Cohen travelled to America and brought back an idea that would change the face of British shopping – self-service. This enabled more people to be served faster, with lower labour costs. Tesco branches in St Albans and Sainsbury Croydon were among the first British stores converted to the self-service model. Though the reaction of customers was mixed at first, now this type of grocery shopping is commonplace.

In 1947, Tesco Stores (Holdings) got its shares to the stock exchange. The initial share price was 25 pence.

In the 1950s to 1960s, the business started enlarging its scale. Over 500 new stores were purchased. In 1956, Tesco opened its first supermarket, in a former cinema at Maldon, Essex. Its supermarket in Leicester got to the Guinness Book of Records as the largest store in Europe, with 1,600 square metres of the sales area. The new format stores included a counter service selling cheese, butter and meats weighed by sales assistants. Other goods were self-served.

Having expanded the number of stores, Tesco started adding variety to the sold goods. Soon brand supermarkets and stores started selling household goods and clothing. Cohen further expanded the company by takeovers and mergers, making it the fourth largest chain in the United Kingdom by 1968. The first ‘superstore’ was opened in Crawley, West Sussex. It was 40,000 sq. ft. in size, and sold both food and non-food goods.

At this period, the company’s management was gradually overtaken by the founder’s sons-in-law. It was hard for them to prove their points before the autocratic Cohen. Fierce clashes took place between Sir Jack and Sir Leslie Porter, who married Cohen’s younger daughter, Shirley. In his memoirs, one of the Tesco Chairmen, Lord MacLaurin even recalls them duelling with Wilkinson swords from the boardroom wall. Sir Jack was threatening to kill his successor, after one unfortunate comment. On another occasion, some hitting was involved. MacLaurin compared Cohen to a mafia godfather, in the way he controlled the business. It was hard to introduce many modernisation elements, as Sir Jack Cohen became very reactionary those days.

However, eventually Porter’s stubbornness paid off. Tesco began the modern pattern of building large stores on the edges of towns with ground-level parking and petrol stations. Offering cheap petrol was one way the supermarkets could outwit their competitors, and persuade even more customers with cars to come and shop there. Luring customers with vehicles meant more shoppers who could buy products in large quantities, i.e. doing their weekly grocery shopping.

A major price-cutting initiative called ‘Checkout at Tesco’ was also introduced in the 1970s. This was a successful substitute to the Green Stamps program.

In 1979, Jack Cohen died. The company was led by his son-in-law Leslie Porter until 1985. Then Porter was succeeded by Ian MacLaurin. He continued to drive Tesco relentlessly forward to eventually overtake Sainsbury’s in the 1990s as the nation’s favourite grocer. Although Porter remained the company’s president until 1991, he completely left the daily running of the company to his successor. After MacLaurin, the post went to Terry Leahy. He bowed out in 2011 after 14 years in charge, having turned Tesco into the world’s third-biggest retailer.

Porter’s achievements were recognised by a knighthood, as it previously happened to his father-in-law and brother-in-law. MacLaurin and Leahy had also got their titles as food retail business leaders. However, the next appointed CEO, Philip Clarke was not that successful. In fact, he was sacked after a series of profit warnings and an accounting scandal subject to a Serious Fraud Office investigation.

In the 1980s Tesco first used computerised checkouts. Those may not be the checkout-free supermarkets of 2021, but that was a great novelty back in the day.

In this period, Tesco already had 100 ‘superstores’. When the ‘Checkout 82’ initiative was launched by Sir Ian MacLaurin, prices were cut by between 3% and 26% on 1,500 food items. The network also introduced a range of healthy own-brand products.

The next decade saw the introduction of a new Metro format. The first Tesco Metro opened in Covent Garden. Smaller stores meant more location variety. Now Tesco could be situated in the centres of cities and towns, providing customers with smaller daily needs. Other formats including ‘Tesco Express’ and ‘Tesco Extra’ appeared a bit later. Extras brought new homeware and electrical goods selection, whereas Express are neighbourhood convenience stores. This format is even more compact than Metro stores and has a limited product selection. Besides new formats, Tesco started its international expansion.

In 2003, Tesco Plc had also launched a joint venture with telecommunications service provider O2. Originally launched as a Pay As You Go service, it was renamed Tesco Mobile. This mobile virtual network operates in the UK, Ireland, Slovakia, and the Czech Republic. The service now additionally offers No-Contract Sim and Pay Monthly deals, operating exclusively online and in 500 phone shops.

In 2018, Tesco opened a new chain of discount stores, called Jack’s, after its founder. This move was to compete with the discount chains Aldi and Lidl. The Jack’s retail stores remind of the initial format of Tesco stores 100 years ago: simplified range of products and lowest prices possible.

Despite dedication to its centennial legacy, the retail giant is also experimenting with new shopping models. This year, testing of a new unmanned supermarket started in High Holborn, London. To use the store, shoppers will need to use the Tesco app. High-tech cameras track the items shoppers place in their baskets, whereas weight sensors recognise when items are taken off shelves. Then, the total price is calculated and a customer is charged in-app. There is also a section in the store specifically for age-restricted products, with a separate exit where staff will check ID.

This system is the next automation step after self-service tills and the Tesco Scan & Shop service.