Apple revealed how much money App Store helped to earn

Apple has revealed that the App Store ecosystem supported $519 billion in billings and sales globally in 2019 alone.

Since Apple only receives a commission from the billings associated with digital goods and services, over 85% of the $519 billion total accrues solely to third-party developers and businesses.

The App Store is a place where innovators and dreamers can bring their ideas to life, and users can find safe and trusted tools to make their lives better. In a challenging and unsettled time, the App Store provides enduring opportunities for entrepreneurship, health and well-being, education, and job creation, helping people adapt quickly to a changing world. We’re committed to doing even more to support and nurture the global App Store community — from one-developer shops in nearly every country to businesses that employ thousands of workers — as it continues to foster innovation, create jobs, and propel economic growth for the future
Tim Cook, Apple’s CEO

Out of the $519 billion, sales from physical goods and services accounted for the largest share, at $413 billion.

According to information, m-commerce apps generated the vast majority of sales, among which retail was the largest, at $268 billion. Meanwhile, travel apps accounted for $57 billion, whereas ride-hailing apps generated $40 billion in sales. 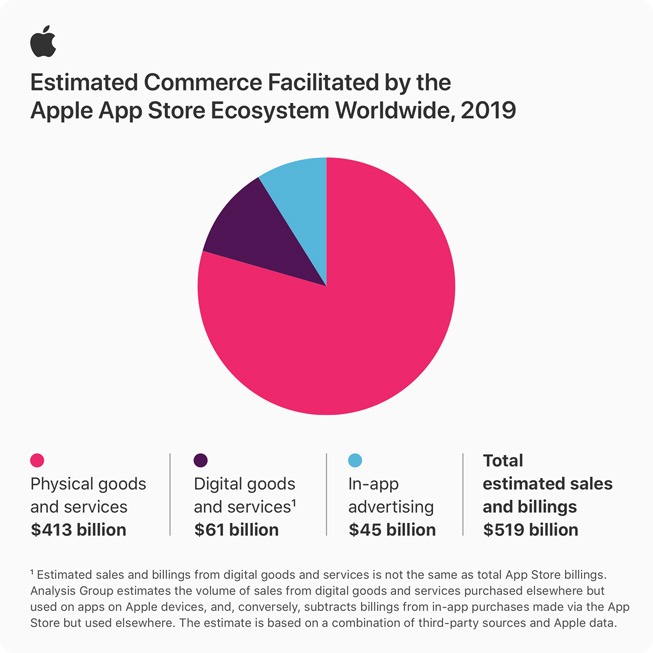 The study found that billings and sales from digital goods and services comprised $61 billion. This category included apps for music and video streaming, fitness, education, ebooks and audiobooks, news and magazines, and dating services.

As to in-app advertising, its sales accounted for $45 billion, and of that, 44% was derived from games.

We’ve reported that Apple’s shares rose close to 90% in the past twelve months. However, market analysts are expecting further growth in the nearest future, despite the coronavirus outbreak.