American geopolitical strategist, speaker, and author of The End of the World Is Just the Beginning: Mapping the Collapse of Globalization, Peter Zeihan had a lot to say about Bitcoin (BTC) on the Joe Rogan Experience podcast. And the cryptocurrency community is seething. 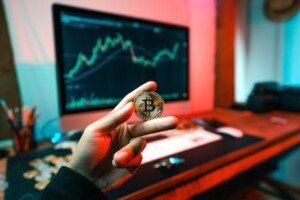 Peter Zeihan says Bitcoin at $16,000 has another $17,000 to go, implying the cryptocurrency’s lack of value. Source: Unsplash

Of the 2 hour long podcast, geopolitical strategist and author Peter Zeihan spent less than 2 minutes discussing Bitcoin. And he managed to pack in a lot of misconceptions. Most notably was Zeihan’s belief that BTC has “no intrinsic value”, a narrative perpetuated by the likes of the Central Bank of India, an avid crypto critic.

Joe Rogan, host of the eponymous Joe Rogan Experience, has voiced interest in Bitcoin since 2014. Despite his support of crypto, Rogan listened attentively as Zeihan went on to due to Bitcoin’s supply being capped at 21 million coins, “it cannot be used for trade”.

1. To be valid, money must be created and controlled by a central authority.

3. #Bitcoin and #crypto are interchangeable.

Contrary to Zeihan’s claims, deflationary currencies have a proven capability of promoting the lowering of prices over time. Such was the case with Gold in the U.S. in 1913.

Angering a crowd for attention is not a new PR stunt, perhaps Zeihan was pursuing just that when he made erroneous statements about Bitcoin. Although Zeihan sounded confident, ultimately the author was just very confused. He contradicted his statements when Rogan asked to clarify that since BTC supply is capped, “the only thing that can happen is Bitcoin becomes more expensive,” to which Zeihan replied, “right!”