Who are robot influencers and how to collaborate with them

Virtual influencers are changing the landscape of modern SMM 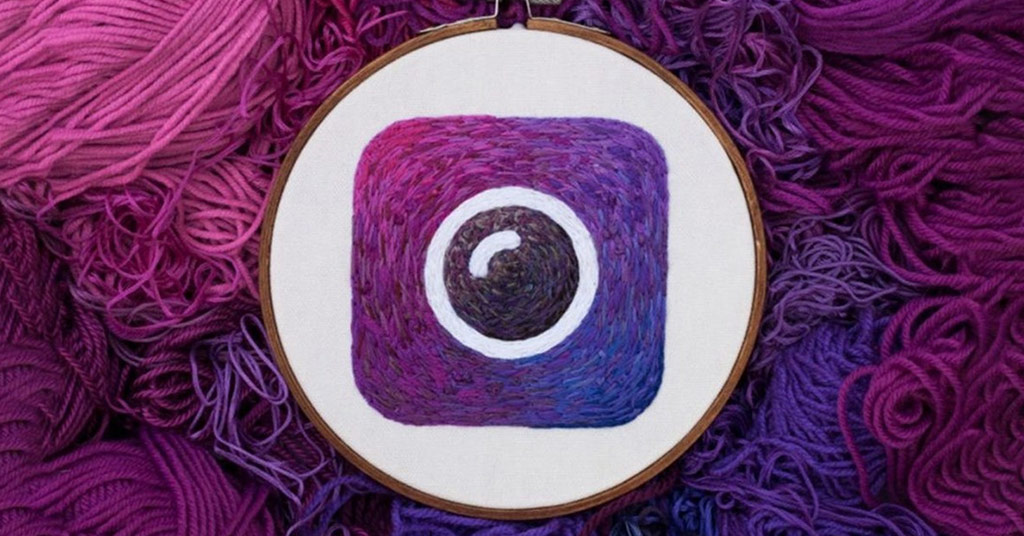 Who are robot influencers and how to collaborate with them. Source: instagram-press.com

Social media is shaping public opinion, from lifestyle trends, and influences most business industries. Due to the loyalty of their fanbase, influencers have the biggest marketing impact. According to a survey by Nielsen, 92% of customers trust an influencer more than an advertisement or traditional celebrity endorsement.

Moreover, as the trust towards robots and AI rises, customers tend to follow robot influencers almost as eagerly as human ones. Besides, due to the anonymity of the Internet, most followers may not even be able to distinguish between humans and robots present on social media.

Who are robot influencers and what do they do?

Robot influencers are virtual personalities powered by computer-generated imagery (CGI), artificial intelligence (AI), and Generative Adversarial Networks (GAN). Virtual influencers look like real people, have their unique sets of personal characteristics, and copy the behaviour of their human counterparts. At this point in time, their social media presence is fully controlled by their human creators.

There’s a team of tech-savvy creators behind every CGI influencer. Those nameless producers develop the SMM strategies for robotic figures, grow their Instagram platforms, choose the brands to collaborate with, and receive the revenues. However, there are startups already working on the next generation of virtual influencers who will be more autonomous, able to move between social media platforms, as well as use AI algorithms and machine learning to talk and evolve.

Robot influencers participate in advertising campaigns, pose like real models demonstrating fashion items, go in and out of virtual relationships with other CGI characters to raise public interest, show the moments of their “lives” – travel, eat, meet up with friends, and do whatever else human influencers do online.

As for collaborations with brands, robotic influencers perform the same functions, but have numerous advantages over their human competitors:

Some examples of popular robot influencers are:

Lil Miquela (Miquela Sousa), 19-year-old robot living in LA, with 3.1 million followers on Instagram and 186,000 monthly listeners on Spotify. The influencer represented top bands like Samsung, Calvin Klein, Supreme, Prada and Chanel. She has also been used in social campaigns like Dark Cloud that attracts public attention to the cyberbullying issue.

Shudu Gram, the world’s first digital supermodel created by the British former photographer Cameron-James Wilson after a decade working in fashion. This robot influencer has 222K followers. Wilson sees CGI modelling as a future avenue for real-life models to book multiple gigs at the same time — or to save real, physical work for jobs that pay more. Just as a real-life model, Shudu works for a modelling agency.

Virtual influencer marketing agency, the Diigitals, now has seven robot influencers under its portfolio: Shudu, Dragnny, Brenn, Koffi, Aspen, Boyce, and Galaxia. These virtual fashion models have endorsed some of the top brands in this world like Samsung, S Moda, Phoenix, Vogue, Cosmopolitan, and others.

Bermuda, with 280K followers, is a “friend” of Lil Miquela, supposedly created by the same Californian start-up called Brud. Previously, the former Trump-supporting Instagram influencer “hacked” Lil Miquela’s profile forcing the former “to tell the truth” about her being a robot. Although Brud claimed the action came from their rivals, it looked more like a stunt to attract more attention to Miquela, who is now the apparent opinion leader among the robo-influencers.

Noonoouri, a virtual influencer created by graphic designer Joerg Zuber. This apparently fake and anime-looking girl has a staggering audience of 387K followers who don’t mind her obvious robotic nature. She has even collaborated with Dior and Kim Kardashian. Besides, Noonoouri advocates for real-life issues like the environment protection, racial and geder equality and animal cruelty.

How to collaborate with virtual influencers

Besides being created by teams of graphic designers, robo-influencers don’t differ much from human ones. Brands and businesses may contact their social media profiles to offer collaboration. In fact, many brands have already done so, bringing actual money to the famous virtual personalities and their creators.

According to the UK online marketplace OnBuy, which made rough estimations of virtual influencers’ salaries with the help of Influencer Marketing Hub’s Sponsored Post Calculator, CGI characters can earn anywhere from £17 to £9 million annually depending on their social media activities.

Here you can see the approximate cost of a sponsored post for the most popular digital influencers. Please, note that the estimations were made in 2020, so today with a larger number of followers, the prices may well be higher. 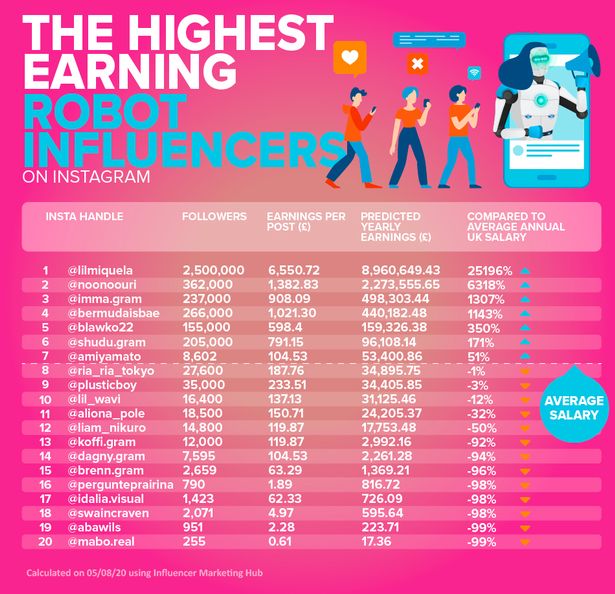 Another way to collaborate with a robot influencer is for a brand to create one. For example, global automotive brand Renault created their very own virtual ambassador, Liv, who was introduced to the audience in their 2019 TV advert for a new Renault KADJAR model.

This is Renault’s raison d'être. We have always built vehicles to suit people's real life, to simplify it but also magnify it… ‘Passion for life’, our brand signature, is the demonstration of this. That’s why we are now continuing to embark on the launch of our new SUV model, the Renault Kadjar. And what better than a virtual ambassador to feel real behind the steering wheel of this vehicle and show the authenticity of the actual experience?
Gaëlle Le Grouiec, Renault’s marketing communication director Europe G9

Although Renault’s creation is not present on social media (yet?), the car-maker may as well follow the lead of the Brazilian retail company Magazine Luiza. Their virtual representation on Instagram is a robo-influencer Lu do Magalu, with 5.7 million followers. Lu is also present on other social media. She first came to life on YouTube in August 2009 to promote iBlogTV on behalf of Magazine Luiza (“Magalu”). Since 2009, Lu has used her massive rapidly growing social media accounts to feature unboxing videos, product reviews, and software tips on behalf of the company.

Creating a controlled, customised virtual influencer gives brands full power over media representation. At the same time, it may not trigger the same customer engagement, as advertising brand products is really all that such digital ambassador characters do. Their social “lives” are not as interesting as the likes of autonomous robot-influencers who imitate real-life Instagram routines, present different brand products, and even advocate for the social good.