In this article, we’ve gathered brief reviews of 3 pilot projects on issuing central bank digital currencies as an equivalent to cash 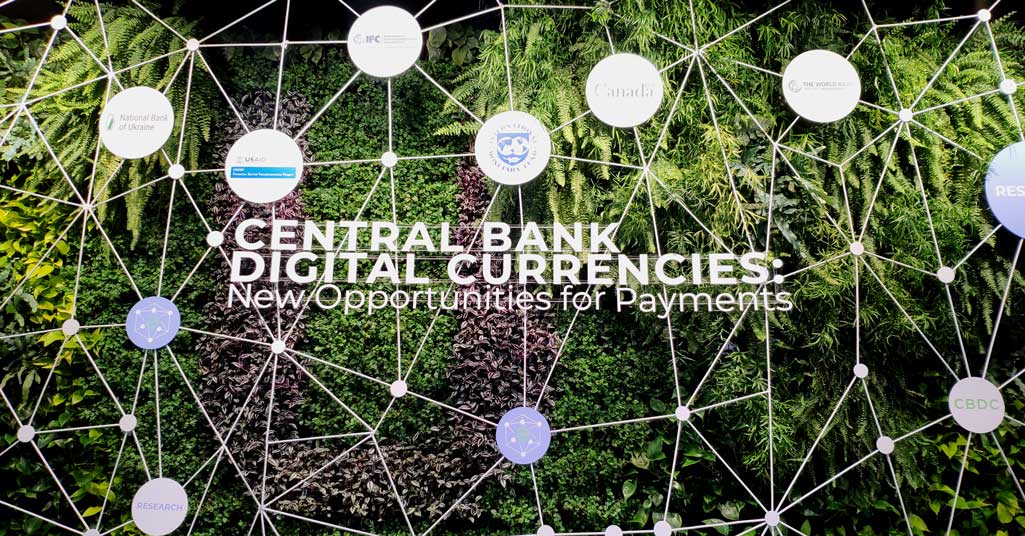 Last Friday, on February 21, the National Bank of Ukraine (NBU) organized the International Conference “Central Bank Digital Currencies: New Opportunities for Payments“, gathering delegates from IMF, World Bank and central banks all over the world, as well as business representatives. The event took place in Kyiv, Ukraine, and was aimed at sharing the knowledge and experience on the potential introduction of CBDC and its place in the financial ecosystem. Moreover, NBU introduced a game showing how paying with e-hryvnia may look like once (or if) it goes live.

PaySpace Magazine Global attended the event to offer you insights on what are the opportunities, potential, and prospects of introducing central bank digital currencies (CBDC), and how they can be implemented as an equivalent to cash. 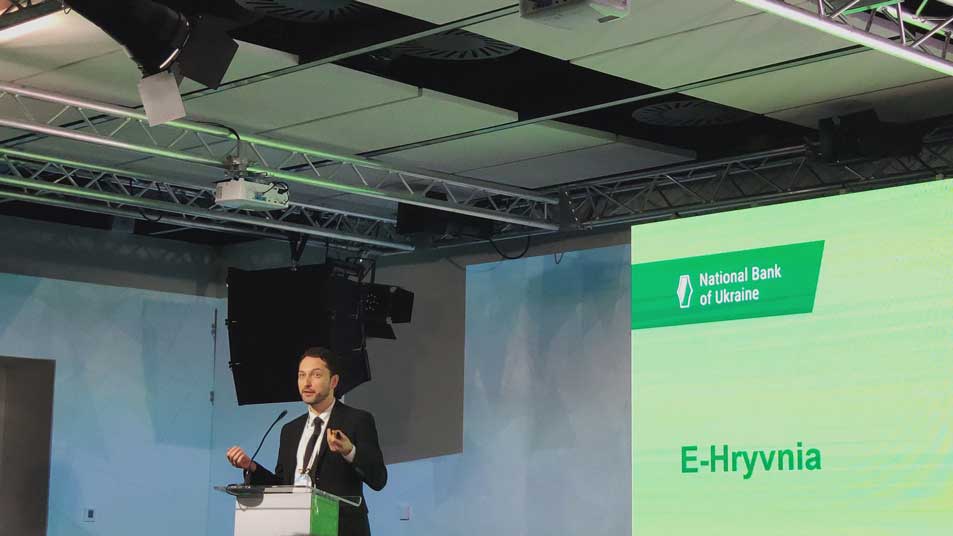 In 2016, the National Bank of Ukraine launched a pilot project on issuing proprietary digital currency, the e-hryvnia. In this pilot, the regulator examined the possibility of using CBDC as a substitute for cash, along with whether it can increase the level of financial inclusion or not.

According to the NBU vision, e-hryvnia should be used as a mean of payment, and therefore be convertible to cash without any limitations.

In 2018, the NBU and several technological companies from the Ukrainian market implemented a practical pilot, which included the creation of a private blockchain platform, issuance of the limited supply of e-hryvnia, and launching and testing of a digital wallet for this digital currency.

During the pilot, the group of experts tested such operations with e-hryvnia as the creation of e-wallet in a web browser, installing the mobile app, refilling the e-wallet with e-hryvnia using PROSTIR (national payment system of Ukraine) card, P2P-transfers of e-hryvnia, mobile balance top-ups and donations for charity using e-hryvnia.

Roman Hartinger, the Head of Division for Innovative Projects of the Payment Systems and Innovative Development Department at the National Bank of Ukraine, presented a chart reflecting the comparative characteristics of e-hryvnia with other forms of money. The centralized model was tested during the above-mentioned pilot.

Mr Hartinger also shared some of the conclusions and results of the pilot project, which are: 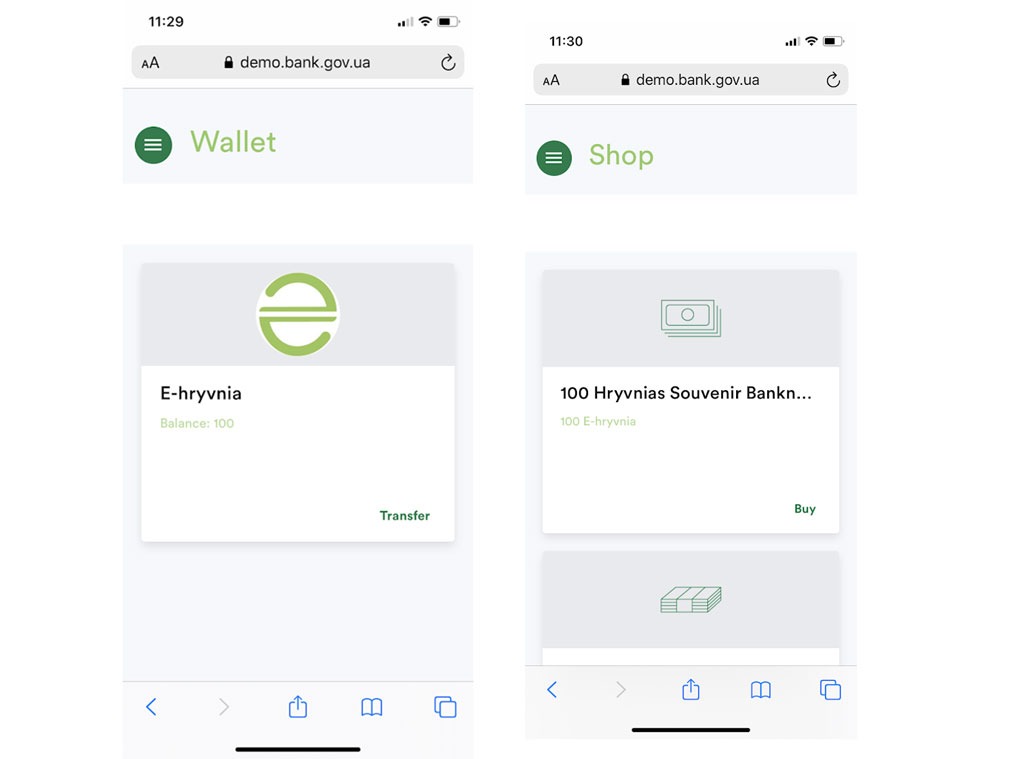 The NBU also showcased a mobile app, allowing users to participate in polls regarding CBDC to earn “e-hryvnia” and exchange it for souvenirs from the regulator. However, the Bank’s representatives emphasized that was not a real e-hryvnia, but only an emulator. It offered the participants of the event a chance to experience how it can possibly work in the future. 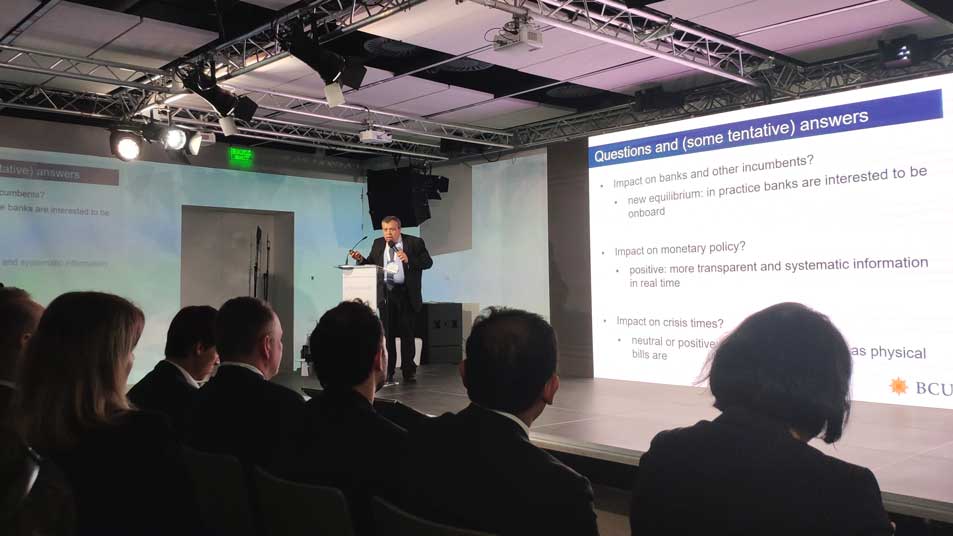 The pilot project of the Uruguayan Central Bank on the issuance of e-peso lasted 6 months (November 2017 – April 2018) with limited bill issuance of 20 million for 10,000 mobile users. There were limits on the max amount of e-peso per person (30,000 per wallet, which is approximately €1000 per wallet) and per registered business (200,000). E-peso could be used for instant payments in registered businesses and for P2P transfers among users. The system implied no need for internet connection, as it used a mobile phone line. E-peso was anonymous but traceable and used Global E-note Manager (GEM) encryption, with unique bills preventing double-spending and falsification, and granted security for a user even in case they lose their device or password.

The test period showed that banks are interested to be onboard in the future. Moreover, e-peso may have a positive impact on the monetary policy, providing more transparent and systematic information in real time.

In February 2019, the International Monetary Fund praised the pilot in its Country Report No. 19/64.

E-peso is expected to reduce transaction costs, encourage financial innovation, and increase financial inclusion. The central bank of Uruguay is one of the pioneers in world in taking a proactive approach in evaluating the case for the CBDC. [...] Further analysis is needed to analyze the impact on monetary policy transmission, the banking system, and dollarization. The consequences of the introduction of the CBDC on payment systems, financial intermediation, the conduct of monetary policy, and financial integrity will hinge on its design and on country-specific characteristics
IMF

However, the institution notes that as the banks did not participate in the pilot, it is difficult to analyze the impact on the banking system. 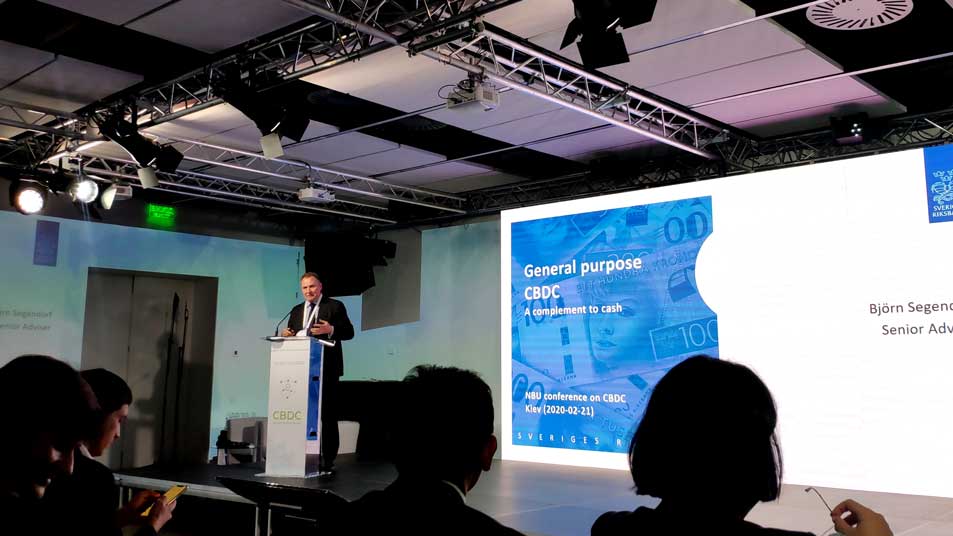 E-krona project started in spring of 2017, with the aim of examining the scope for the Riksbank to issue a central bank digital currency. As well as Ukrainian and Uruguayan central banks, Riksbank believes e-krona can increase financial inclusion by giving the general public access to a digital complement to cash.

The Riksbank has also analyzed the public demand for an e-krona. It surveyed several national and international agents to hear their views on the CBDC, looked at possible technological solutions and examined the legal issues regarding the e-krona issuance.

Earlier this month, Riksbank announced a pilot for developing a technical solution proposal for the e-krona.

Swedish central bank works on it alongside with Accenture, a well-know technological and consulting company. The technical solution will be based on Distributed Ledger Technology (DLT). It will be evaluated in a test environment, with simulated participants like the general public and banks. Those simulated users will be able to hold e-krona in a digital wallet, with the ability to make payments, deposits, and withdrawals via a mobile app. Besides, users will also be able to make payments via wearables, such as smartwatches, and cards. The pilot project ends in February 2021.

It’s been said on the event that 80% of central banks worldwide consider the possibility of a CBDC launch. For now, many countries explore this innovative payment solution by conducting pilots, public talks, research and tests. As for the central banks mentioned in this article, there are currently no final decisions on whether or not to issue digital currencies. Let’s see where it all goes next.