The women featured on currency notes from all around the world 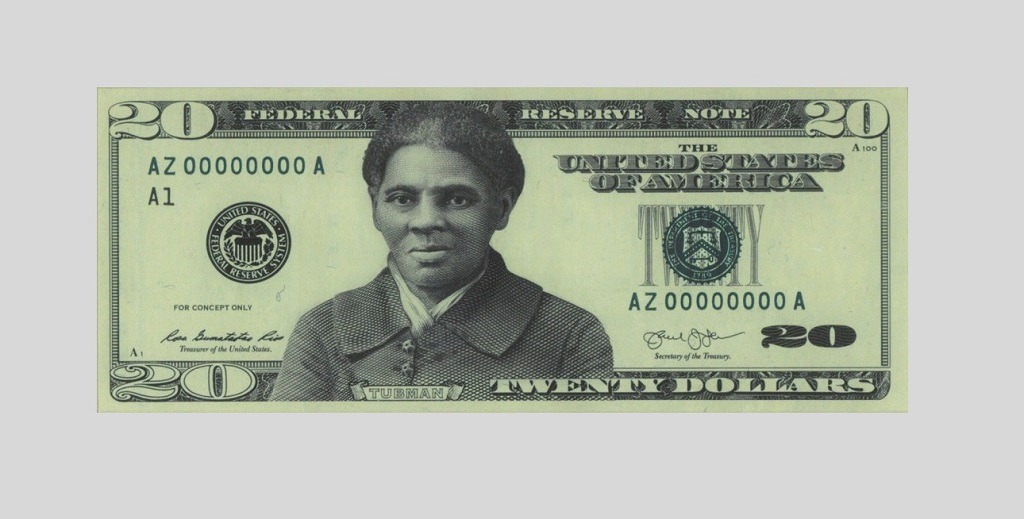 In January, the White House press secretary Jen Psaki said that the administration of the newly elected President Joe Biden will resume the push to put Harriet Tubman on the front of the new $20 banknotes.

The United States’ authorities have been discussing for several years the initiative to replace the slave owner Andrew Jackson depicted on $20 note with the activist Harriet Tubman, who fought for the abolition of slavery. Psaki stated that the US Treasury Department has renewed efforts to place Tubman on the new $20 notes.

PaySpace Magazine has made a selection of currency notes from around the world, which have already immortalized the portraits of famous women. 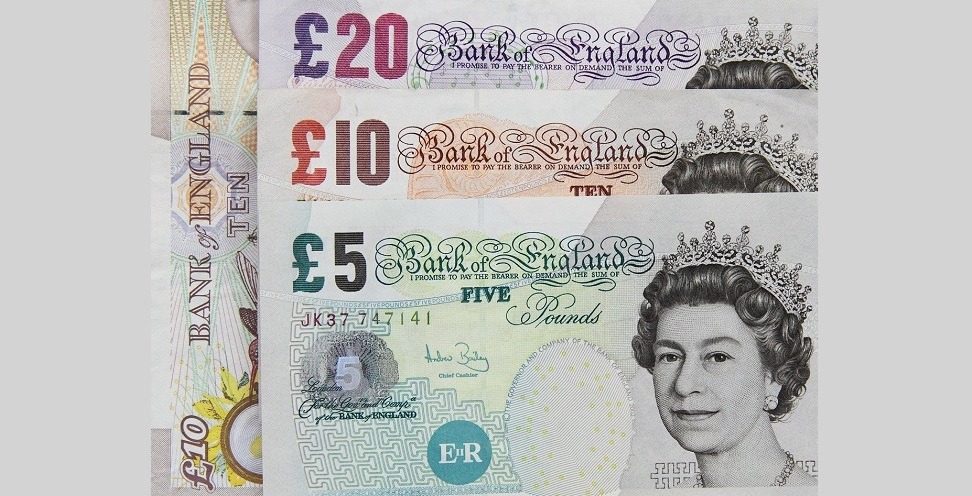 The current reigning Queen of Great Britain is, without doubt, the most famous woman depicted on cash. Her portrait is the symbol of the national currency of the United Kingdom. In addition to Britain, Elizabeth II can also be seen on notes of Canada (the first 20-dollar bill with the future heiress to the throne was issued in 1935), Belize, Eastern Caribbean, Fiji, Bahamas, New Zealand, and Australia.

For several years, Venezuela has been holding the record for hyperinflation. The redenomination of the local currency is so high that 500 grams of white bread will cost you more than 3,5 million bolivars which is just $1,97. In 2007, the Central Bank of Venezuela issued new 2, 5, 10, 20, 50, and 100 bolivar notes. The 20 VES note depicts Luisa Cáceres de Arismendi, the wife of the general Juan Bautista Arismendi, who’s revered in her homeland as a heroine of the Venezuelan War of Independence. On the reverse of the note, a hawksbill sea turtle is depicted. 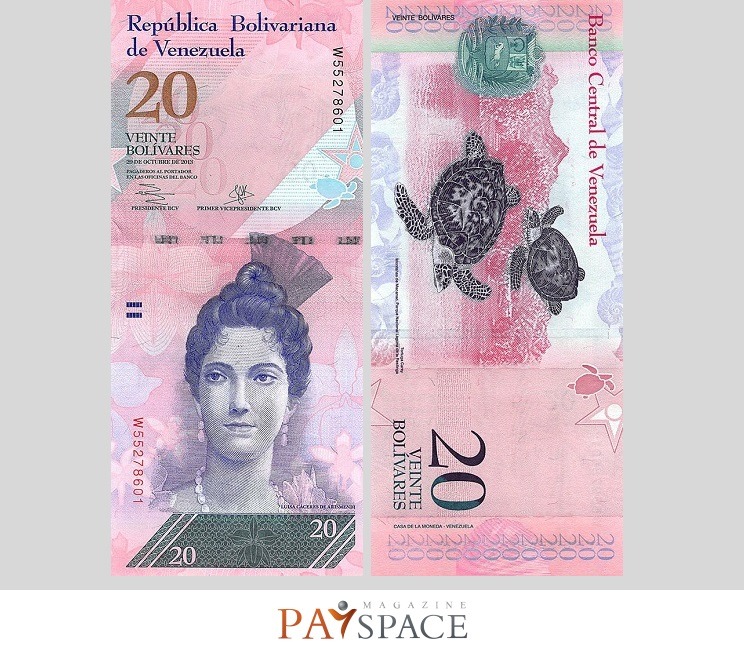 Australian dollars are a celebration of equity in the world of finance. Almost all Australian notes depict both women and men, except the banknote with Elizabeth II, on the reverse side of which the Parliament House in Canberra is depicted. Besides the Queen, Australian dollars also feature the poet Mary Gilmore, the businesswoman and shipowner Mary Ribey, the first woman parliamentarian Edith Cowan (in 2018, the Reserve Bank of Australia issued 46 million banknotes depicting a politician with a typo mistake), as well as the opera singer Nellie Melba. 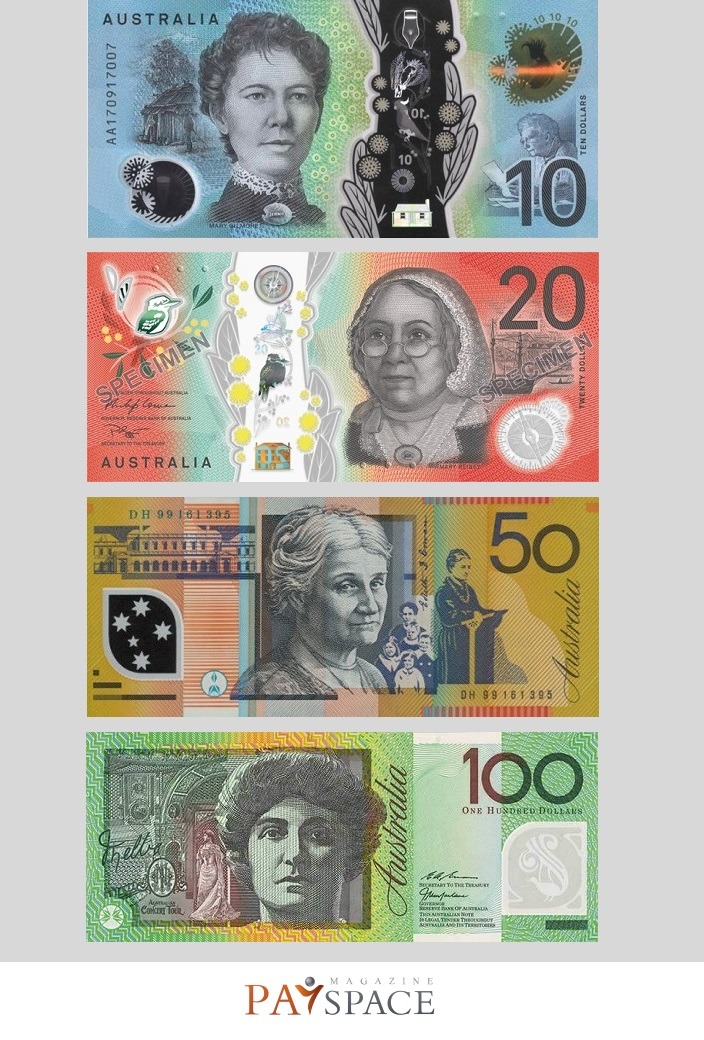 The 10 dollar note in New Zealand depicts Kate Sheppard, the organizer of the Women’s Rights Campaign that resulted in the 1893’s Electoral Act establishing universal suffrage for the first time in the world. The NZ $20 note also features Queen Elizabeth II. 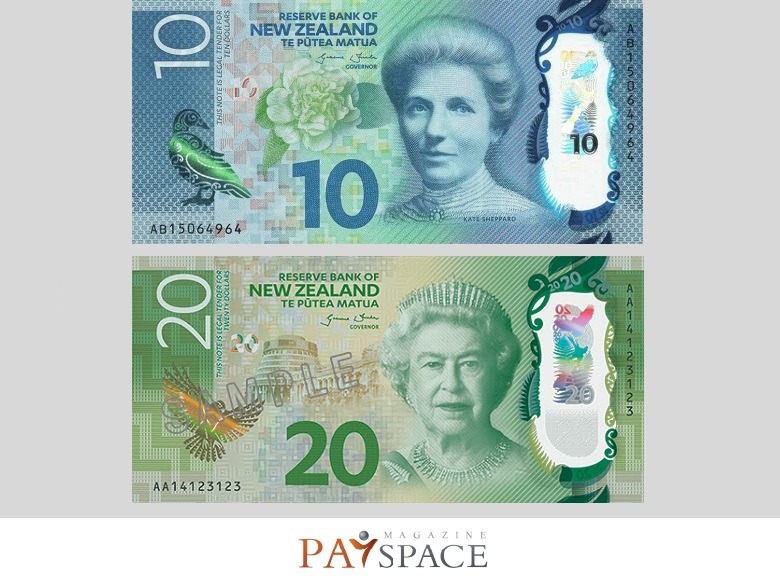 Israel’s first and the world’s fourth female prime minister, Golda Meir, was also one of the first politicians depicted on the country’s national currency. For 10 years, 10 shekel bills with a portrait of Meir circulated in Israel. In 1995, they were replaced along with other paper money with small denominations by coins.

Modern Israel money depicts the poetesses Rachel Bluwstein and Leah Goldberg. The 20 and 100 shekel banknotes are adorned with their portraits 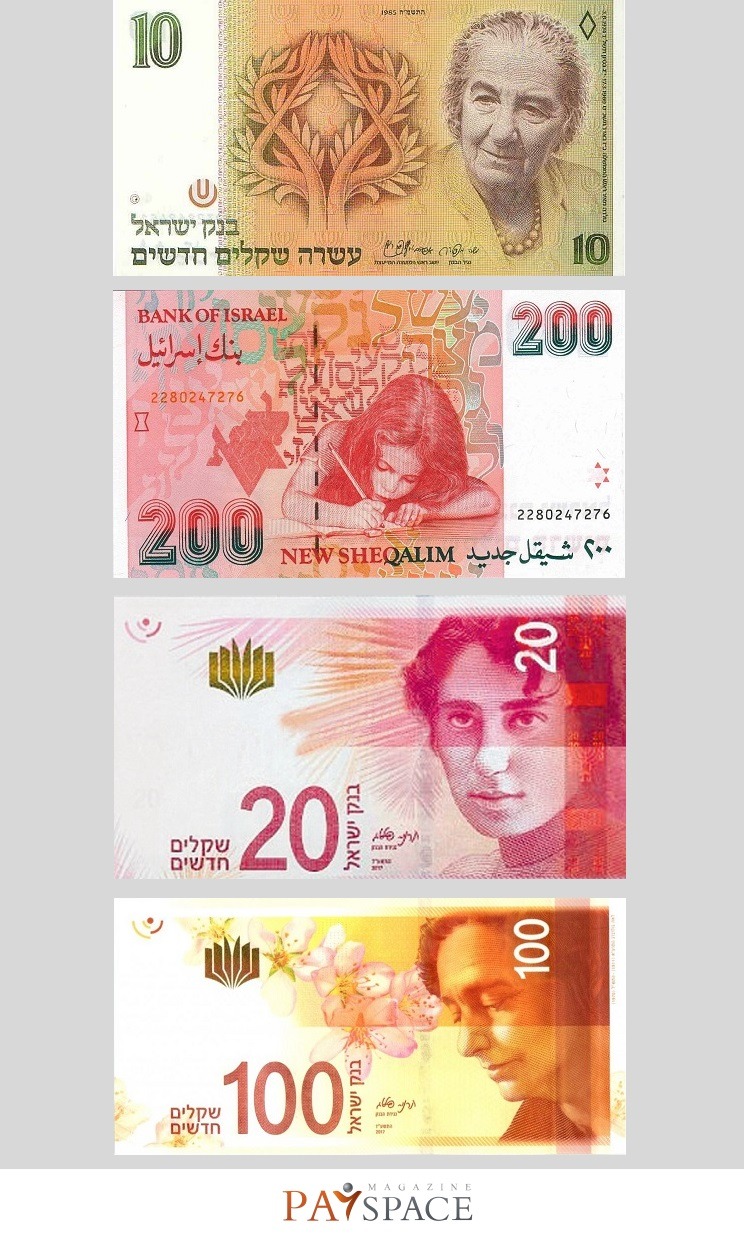 Aside from Queen Elizabeth II, Canadian money features another woman, the human rights activist Viola Desmond, who has fought against racial discrimination in the country. In 2018, the banknote with her image was recognized as the most beautiful currency note in the world. 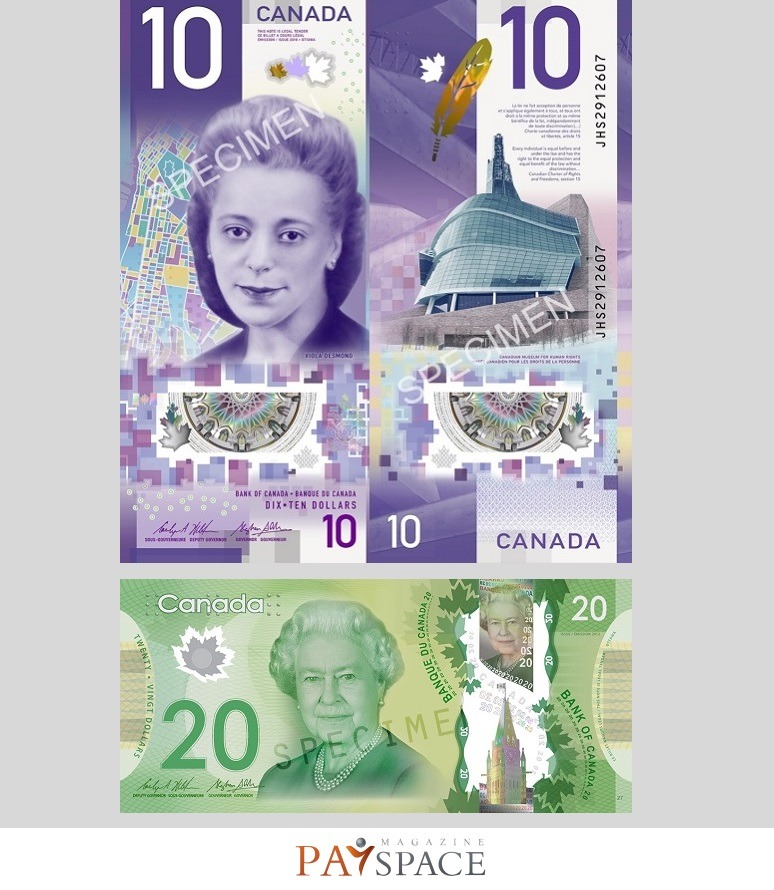 On two bills of Mexican pesos feature the writer, philosopher, composer, poet of the Baroque period, and Hieronymite nun Juana Inés de la Cruz, as well as the famous artist Frida Kahlo. De la Cruz can be seen on the obverse of the 200 peso banknote, Kahlo on the 500 peso bill. The banknote with Frida also features her husband, the famous painter Diego Rivera. 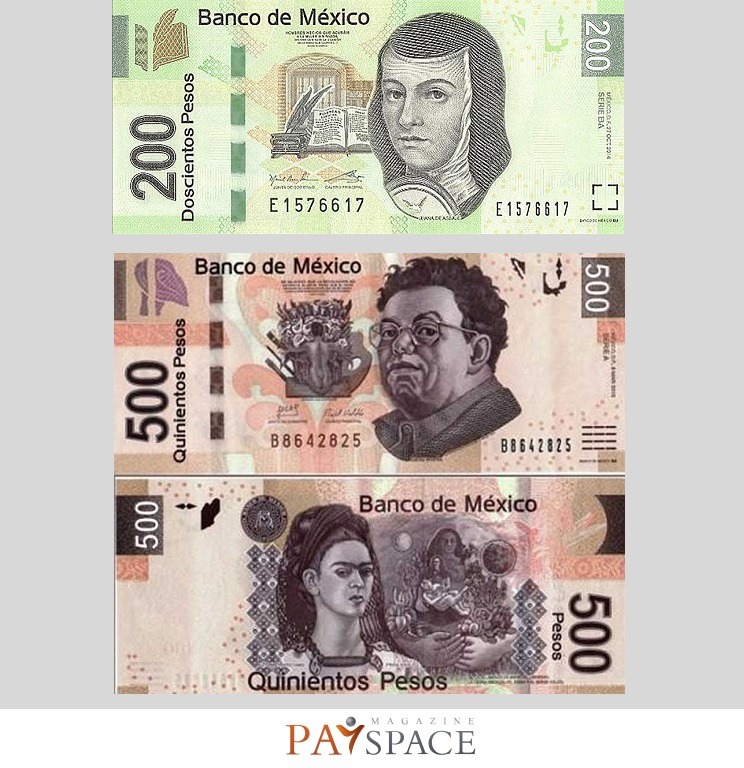 Sweden, being on its way to the status of the first cashless country in the world, currently still uses some paper money. Three Swedish krona banknotes depict well-known representatives of the local culture: the opera singer Birgit Nilsson (500 krona note), the Oscar-winning Greta Garbo (100 krona bill), and “the mother” of Carlson and Pippi Longstocking, the writer Astrid Lindgren (20 krona note). 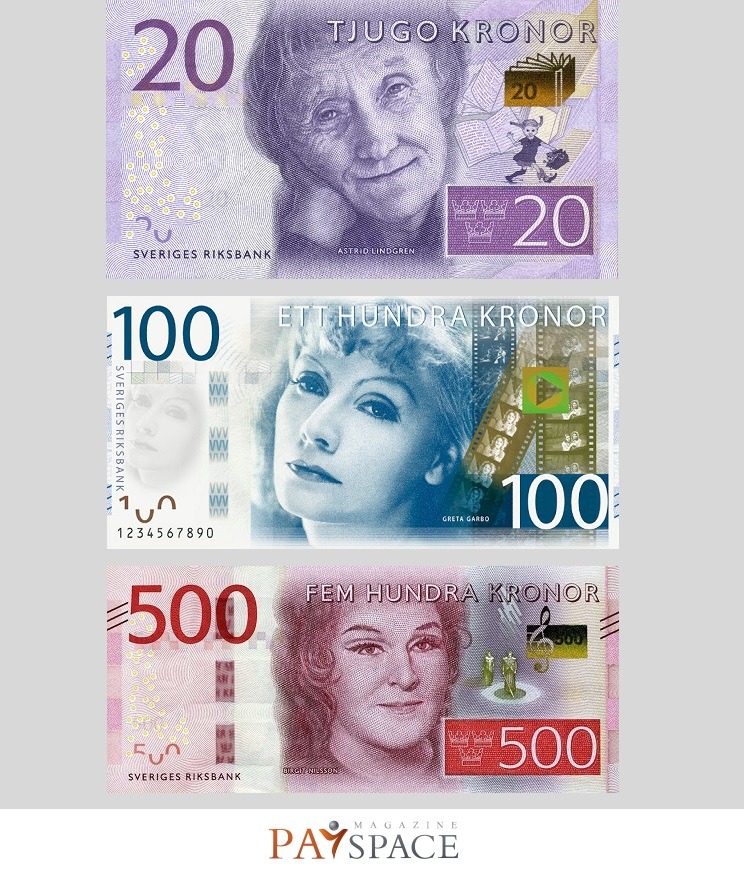 After replacing the 50-koruna bill, featuring Agnes of Bohemia, with a coin, two banknotes with the image of women remained in the republic. The obverse of 500 Czech koruna note depicts the writer and founder of modern Czech prose Božena Němcová (on the reverse of the note, there is a collective portrait of all the heroines of her works), and the 2000-koruna bill depicts the opera singer Emmy Destinn and the Muse of lyric poetry and music Euterpe. 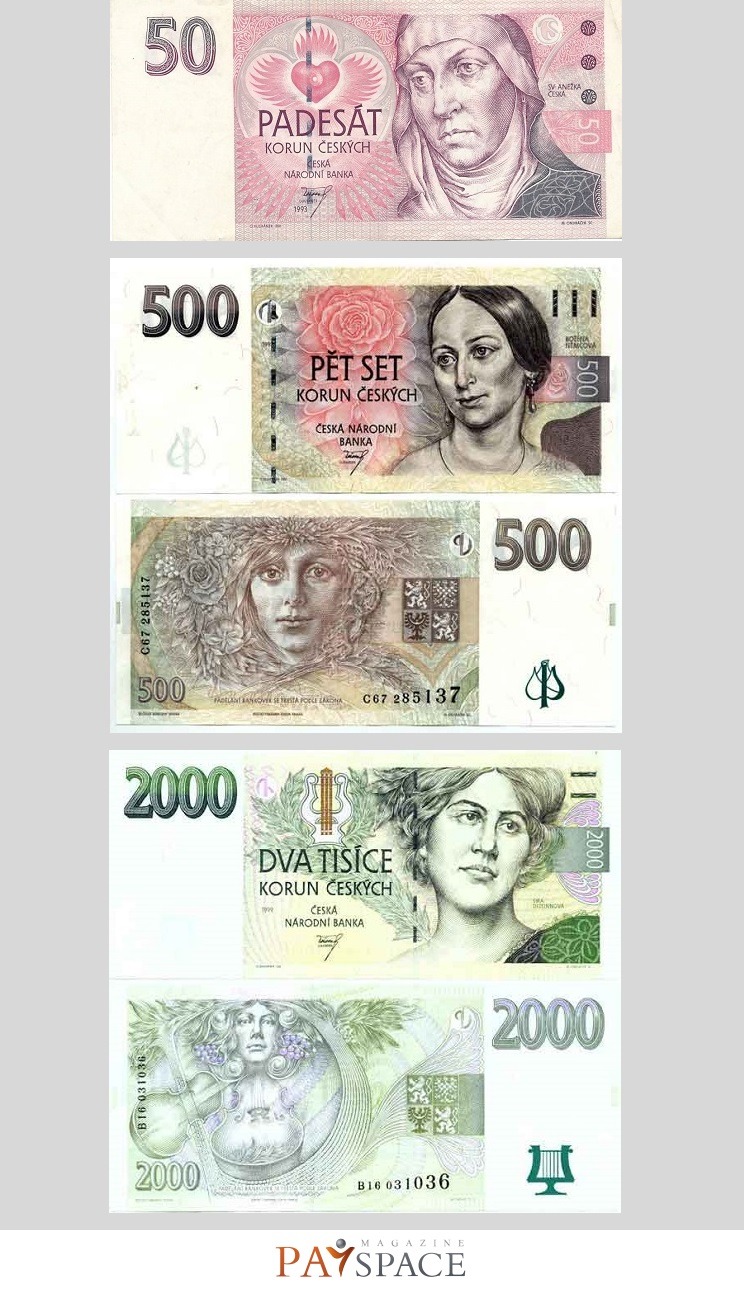 In Ukraine, the only banknote with the image of a woman is a 200-hryvnia bill. The design concept of this banknote has remained unchanged for over 20 years: on the front side there is a portrait of the poetess Lesya Ukrainka, and on the backside – the entrance tower of Lutsk castle. In 2020, the National Bank put into circulation a new 200 UAH with more advanced protection. 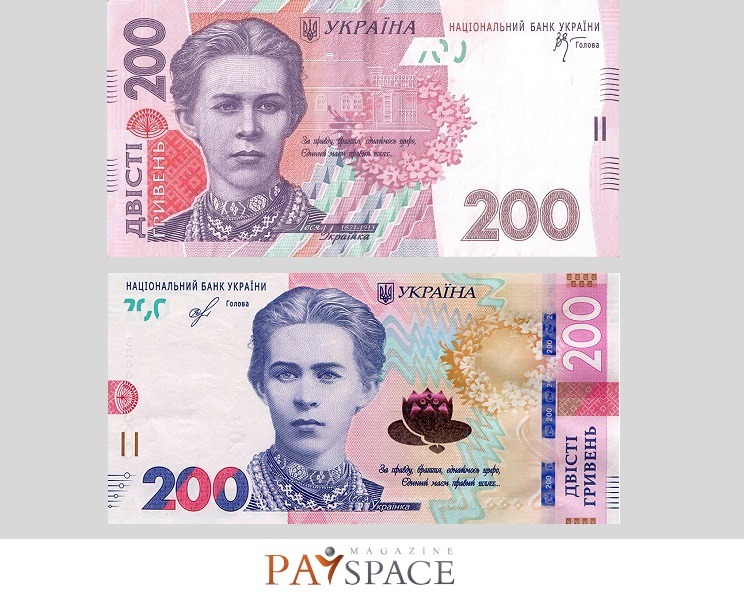 50,000 won is the banknote with the largest denomination in South Korea. It features the artist, writer, calligraphist, and poet Shin Saimdang. On the obverse of the note, Saimdang’s works, paintings “Grapes” and “Grass and Insect”, are depicted. 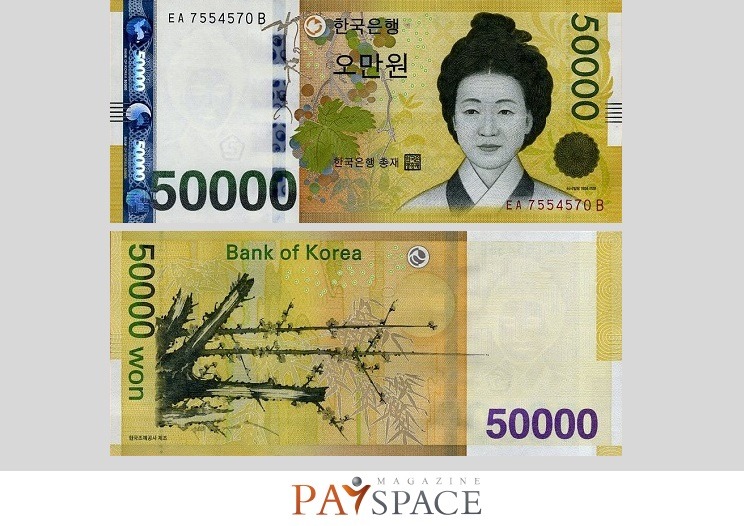 The poet and novelist Ichiyō Higuchi is depicted on a Japanese 5,000-yen bill. Being first issued in 2004, the reverse of the note also features the painting by the artist Ogata Kōrin, depicting irises. 5,000 yen is the second-largest denomination note in the country, with the 10,000-yen bill in the first place. 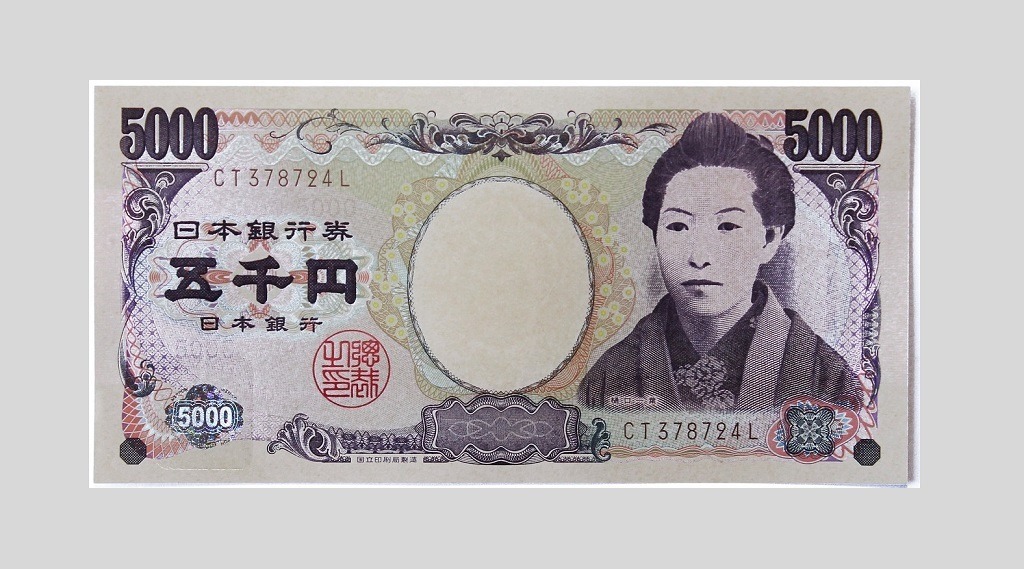