Being a pioneer in the industrial revolution of the nineteenth century, the UK still retains its economic prowess in the world. Although other emerging nations are gradually overtaking their place in terms of absolute economic production, the UK along with its western partners is expected to retain its prominence for the decades to come.

The UK has one of those economies that are the most integrated into the international economy. Therefore, any global recession or boom significantly affects the economy of the United Kingdom. The service sector contributes approximately 80% to the overall economy and apart from technology services, this sector was badly hit by the COVID-19 pandemic.

With a GDP of $3.12 trillion, the UK is the 5th largest economy in the world. It has a GDP per capita of $46,344 and is considered in the club of high-income countries. The UK has one of the most globalized and developed free-market economies and is home to the second-largest financial center in the world.  Pounds Sterling, the currency of the UK, is the fourth-largest reserve currency after the USD Dollar, Euro, and Yen. In terms of overall contribution, these major sectors have the following weightage in the economy.

The following points detail the contours of the UK economy.

Prior to the pandemic, primary concerns related to the UK economy hovered at the impact of Brexit on its economy, particularly the financial sector based in London. However, such concerns are expected to loom again once the pandemic nuances have been taken well care of.

UK economy outlook for 2021 and beyond

Given the much higher growth rates of BRIC club (Brazil, Russia, India, and China), the UK might not hold its economic ranking for an extended period as non-European economies are expected to dominate the international political-economic landscape.

The 6.5% expansion will be fueled by “tremendous” pent-up demand from consumers and small businesses as vaccinations boost confidence following the pandemic. Barclays’ CEO told a conference call for the media Friday. Spending data in the first two weeks of April was “very encouraging” and he anticipates the recovery will continue through 2022. 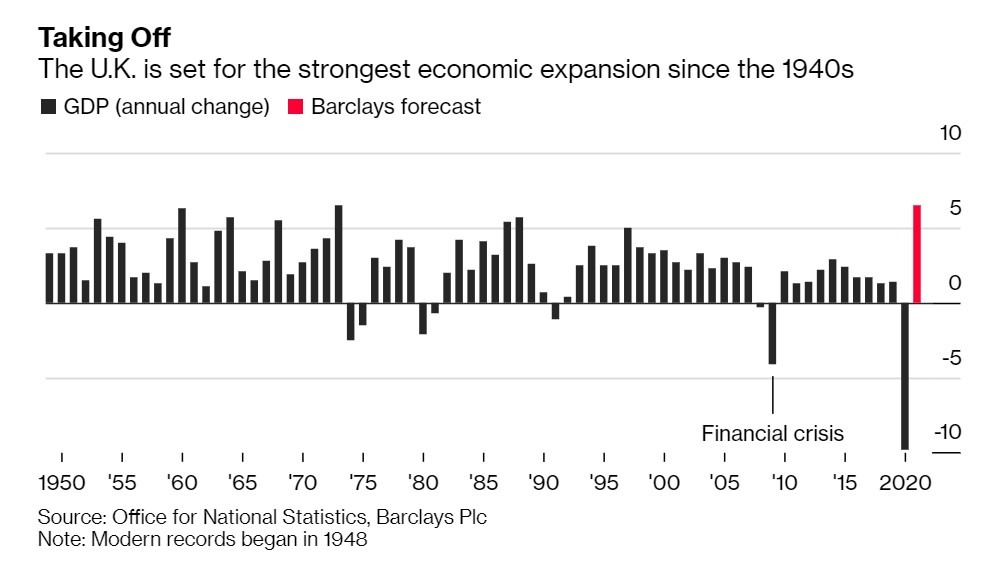 Nevertheless, the recovery is largely on the back of a depressed base after the country’s economy faced the biggest recession in centuries last year. Given industrial output is expected to contract as the lockdown was implemented again in the previous quarter in order to ward off the spread of COVID-19. According to market pundits, the UK economy is projected to return to its pre-pandemic levels next year.

The pandemic also caused a structural change in the economies of the world. For instance, IT and IT-enabled services garnered huge attention, thus the valuations of these listed companies skyrocketed all over the world. Apart from that, residential real estate also became a hot investment as work from home or a hybrid model to work is in the offing, even after the pandemic situation improves. On the other hand, commercial real estate saw a fall in their price as their usability and expected yields in the form of rentals became riskier.

Recent data showed momentum picking up strongly, and Barclays is not alone in its positive outlook. The median estimate of economists surveyed by Bloomberg this month is for a 5.4% rebound. Lloyds Banking Group Plc on Friday also upgraded its outlook for the UK, where well over 60% of the adult population has received the first dose of a vaccine. It now expects growth of 5% this year.

The FTSE All-Share index captures the performance of all eligible companies that are listed on the London Stock Exchange’s (LSE) main market, which passes screening criteria for size and liquidity. FTSE All-Share represents approximately 98% of the UK’s capitalization. Thus, the index is regarded as the best performance measure of the London equity market. Financials, Consumer Staples, and Industrials combined contribute more than half to the index’s capitalization. Additionally, as cyclical sectors dominated the index, FTSE All-Share broadly underperformed the technology-heavy indexes around the world.

In 2020, the index plummeted by roughly 10% compared to the gain of nearly 19% in the year of 2019. However, the unprecedented resurgence in economic activity on the back of successful vaccination campaigns resulted in an approximately 7% uptick in the index to date. Further, the gain in the index was largely on the back of strength in the traveling and manufacturing data. According to IHS Markit/CIPS, the latest data pertaining to purchasing managers’ index revealed that the index soared to 60.9 in April from 59.9 in March and this was marginally above the street consensus.

Thus, the bourse is now rising on the back of improved industrial output as lockdown restrictions eased and demand for goods and services have improved. Hence, boosting employment in an economy. Nevertheless, mounting concerns related to inflation on the back of huge stimulus packages emanating from a record high public debt.

The UK economy is on an upward trajectory and with the sanguine outlook predicted by economic experts on the back of a resurgence in economic activity, we believe that the cyclical sectors are poised to perform well. Cash-rich companies within those sectors are expected to recoup their lost earnings to a large extent. The reason behind this is that these companies have been through hot water, and now it is time for them to grow and flourish. The only concerns that remain are related to the impact of Brexit on the economy as the progress on this issue was put on the backburner after the pandemic hit the world in such a devastating manner. However, given the resilience of the UK economy, we remain optimistic about its outlook.