Home > STOP RUSSIA! > Russia-Ukraine war: What happens to stock markets in case of a full-scale invasion

Russia-Ukraine war: What happens to stock markets in case of a full-scale invasion

What would happen to stock markets in the worst-case scenario? 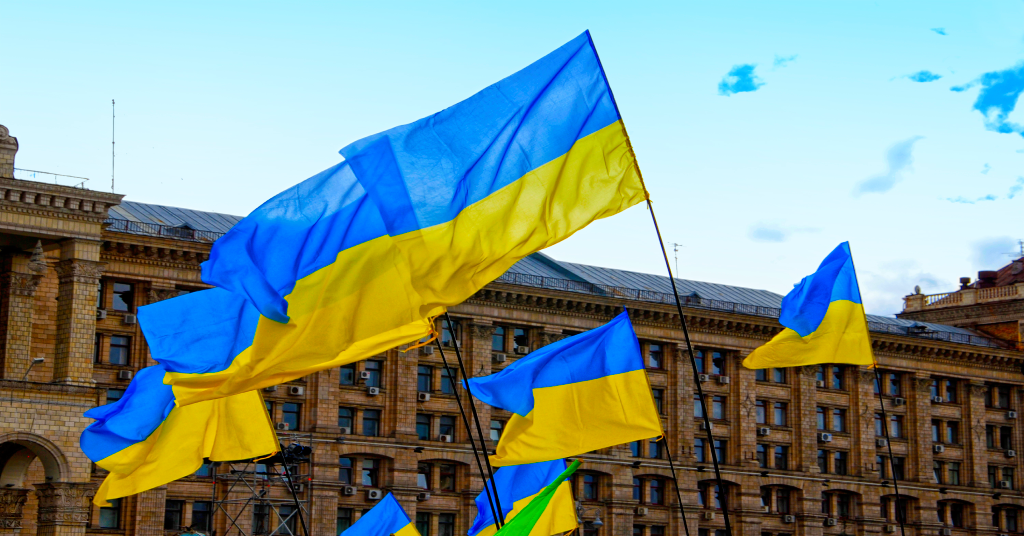 Russia-Ukraine war: What happens to stock markets in case of a full-scale invasion. Source: depositphotos.com

Up until recently, the world treated the ongoing Russian-Ukrainian military conflict as a local issue. Yet, now it seems the war may have a global impact, especially if Russia undertakes a full-scale invasion.

How the conflict is unfolding

A week ago, European stock markets bore steep losses, but regained some points later the same afternoon, in hopes of diplomatic efforts still able to resolve Russia-Ukraine tensions. On the FTSE 100, IAG, the owner of British Airways and Iberia, fell 5.6%. Shares in the major banks closed between 4% and 5% down. Travel stocks were hit hard. Yet, the biggest loser was London-listed Russian mining company Evraz, which tumbled 29%.

Nevertheless, Wall Street witnessed only modest losses of 0.5% to Dow Jones and 0.7% to Nasdaq at that time. That could be attributed to the farther distance from the war zone and less economic connections to Russia.

Meanwhile, the crisis escalated. Late Monday, after days of fabricated claims and staged evacuation, Russian President Vladimir Putin recognized the independence of two rebel-held regions of Ukraine and moved troops into the Donbas region. Under the pretext of “pacifying” the conflict, this might be a preface to a much larger invasion of Ukraine.

The order was condemned as a violation of international law and Ukraine’s sovereignty by several nations at an emergency meeting of the United Nations Security Council. Some European leaders have already reacted with renewed sanctions.

Boris Johnson has announced sanctions against five Russian banks and three billionaires. He added the “first barrage” of sanctions would be extended if the situation escalated further. Germany said it was halting certification of the Nord Stream 2 gas pipeline following Moscow’s actions.

Later the same day, he went forward with the first package of sanctions regarding two Russian banks, the invader’s sovereign debt, and a few individuals from the Russian elite. EU, in its turn, imposed sanctions against Russian parliament members. Banks financing Russian decision-makers and other operations in those territories are also targeted. Both EU and US threaten with more sanctions against those involved in Russia’s recognition of two separatist regions and potential full-scale invasion.

The Dow fell 1.51% this time, similar to Nasdaq -1,58%, as the stakes in the Russia-Ukraine war go higher. Overall, the markets in all corners of the world tumbled along with national currencies.

Of course, the Russian stock market is fairly affected the most, losing about 15% in one day after the infamous political decision to order troops into eastern Ukraine. The rouble losses reached 3.3%.

Crude oil price continues to rise, surging to $96.7 per barrel at their peak on Tuesday. The spike has been driven primarily by fears of supply disruptions, as Russia is the world’s second-largest oil producer.

The crypto market shrank as well. All major cryptocurrencies dropped from 5% to 15%, on average. Crypto investors rushed to offload their risky digital assets to protect portfolios against further price drops. It seems bitcoin or other crypto assets is no longer seen as “digital gold” or adequate protection against major financial crises.

The current dip in the crypto market can be seen as a knee-jerk reaction to the growing tension between Ukraine and Russia. If there was a war between the two biggest crypto hubs in the world, it could shoot up the Bitcoin hash rate, and this fear is keeping the crypto market on its toes
Shivam Thakral, BuyUcoin CEO

What’s going to happen next? Surely, the markets will continue to react to the escalating crisis. Investors will predictably be rushing back to bonds, generally seen as the safest assets. Gold and “safe” fiat like the Swiss franc will get stronger. The market pattern may remind a reaction to recent events connected to Russian military aggression (like the annexation of Crimea), just on a larger scale.

If the Russian invasion could be timely stopped by the economic sanctions, global markets will likely rebound shortly. In this case, Europe will not be affected too much, as Russia is not yet a major market for Europe, and losses will be bearable.

However, if President Putin has an appetite for the whole Ukrainian territory, that will cause major military and economic tensions across the continent. The effect of an extended period of geopolitical uncertainty on financial markets would be particularly severe at a time when the global economy is still recovering from the Covid-19 crisis.

Rising oil and energy prices will impact both the wholesale price index (WPI) inflation and market indices. For instance, Germany’s DAX, with its heavy exposure to Russian gas, fell 3.4% on Monday, mirroring its fall in 2014. Moreover, markets will suffer much more if the war gains a full scale. Natural gas exports from Russia to Western Europe will be significantly reduced or halted.

JPMorgan calculated that a rise of oil price to $150 a barrel would reduce global GDP growth to just 0.9% annualised in the first half of the year, while more than doubling inflation to 7.2%.

Furthermore, the war will cause interruption to the flow of grains and wheat out of the Black Sea region. Both Russia and Ukraine are among the top global suppliers of wheat, corn, and other grains. Kazakhstan and Romania also ship grain from ports in the Black Sea which could be blocked by both military action and sanctions.

As for the stock markets, listed firms that have connections to Russian companies would be impacted the most. For instance, Britain’s BP owns a 19.75% stake in Rosneft, which makes up a third of its production, while Shell holds a 27.5% stake in Russia’s first LNG plant Sakhalin 2 and a number of joint ventures with the aggressor state energy giant Gazprom.

U.S. energy firm Exxon and Norway’s Equinor are also active in the country. Renault generates 8% of its EBIT in Russia. Germany’s Metro AG’s 93 Russian stores generate just under 10% of its sales and 17% of its core profit while Danish brewer Carlsberg owns Baltika, Russia’s largest brewer with a market share of almost 40%.

Banks, that derive large parts of their profit from retail operations in Russia, will suffer most, as Russian banking institutions will be the first to witness severe Western sanctions. Those are, for example, Raiffeisen Bank International, OTP, UniCredit, Societe Generale, etc. Looking at loan exposure to Russia, French and Austrian banks are at most risk among Western lenders at $24.2 billion and $17.2 billion, respectively. They are followed by U.S. lenders at $16 billion, Japanese at $9.6 billion and German banks at $8.8 billion (BIS).