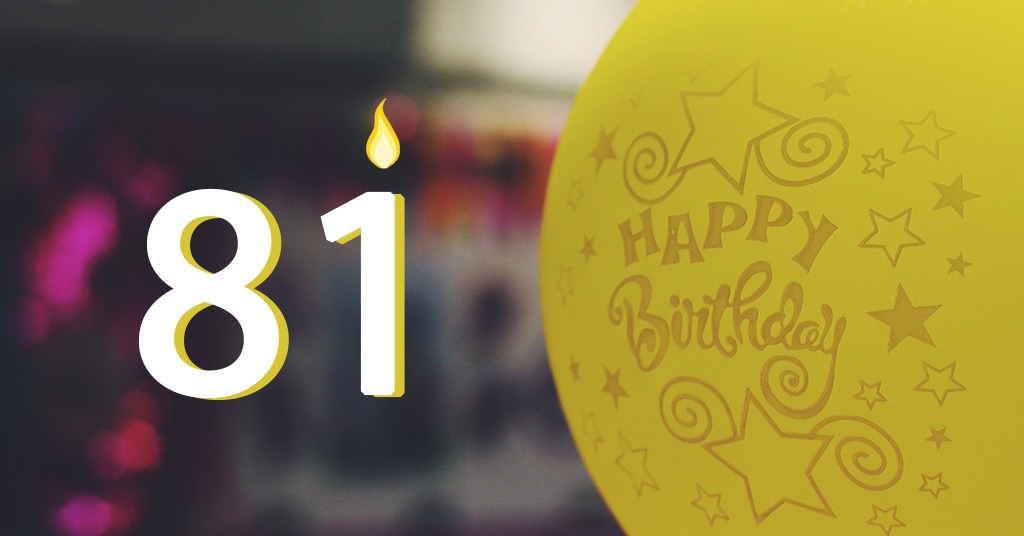 Who could ever imagine that a small grocery store founded March 1, 1938, in South Korea would soon become a major technology producer? A national war reshaped the company’s mission completely. Instead of food, the broken country needed economic development, progress, and innovation. That is exactly what Samsung began to provide. Their technological breakthrough started with domestic appliances such as black-and-white TVs and microwave ovens. In the 1980s the company found their market niche developing quality mobile phones. Even now, many users prefer Samsung mobiles to the very popular iPhones. However, the largest South Korean corporation doesn’t stop at mobile devices. The number of technological solutions it provides is truly significant. It has made some great inroads into the development of international fintech opportunities over the years. Besides all their previous achievements, the company has recently announced the opening of a very promising robotics project. Let’s take some time now to recall the most impressive of Samsung’s innovations and products. 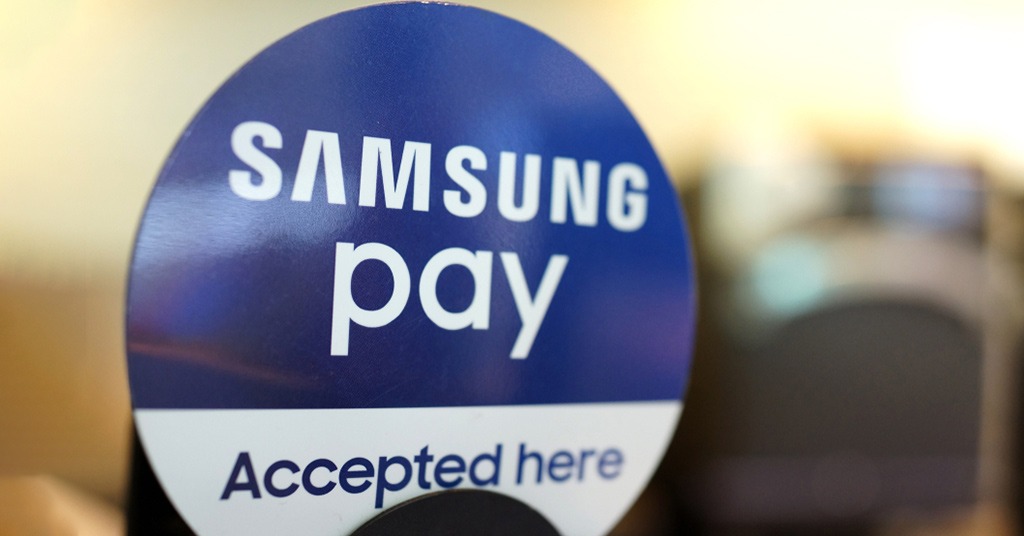 Samsung Pay has become widely accepted all over the world. Source: shutterstock.com

The mobile payments system presented in 2015 differed from its competitors by using an old-school MST technology. MST stands for magnetic secure transmission and basically, is the same mechanism that allowed POS terminals to accept bank cards. Instead of reinventing the wheel, Samsung made good use of existing technology in practically every store. This was convenient for both users who didn’t need to check for any special payment terminal, and for retailers who didn’t have to invest in any additional devices.

Due to the simplicity of the service, Samsung Pay has become widely accepted all over the world. It has taken time for customers to believe in digital payment security though. Samsung chose not to wait for clients to overcome their hesitations. It established a close partnership with numerous traditional financial institutions, adding trustworthiness to perceived shady mobile transactions. Moreover, the partners’ employees were also engaged in educating their customers about their expanded payment options. 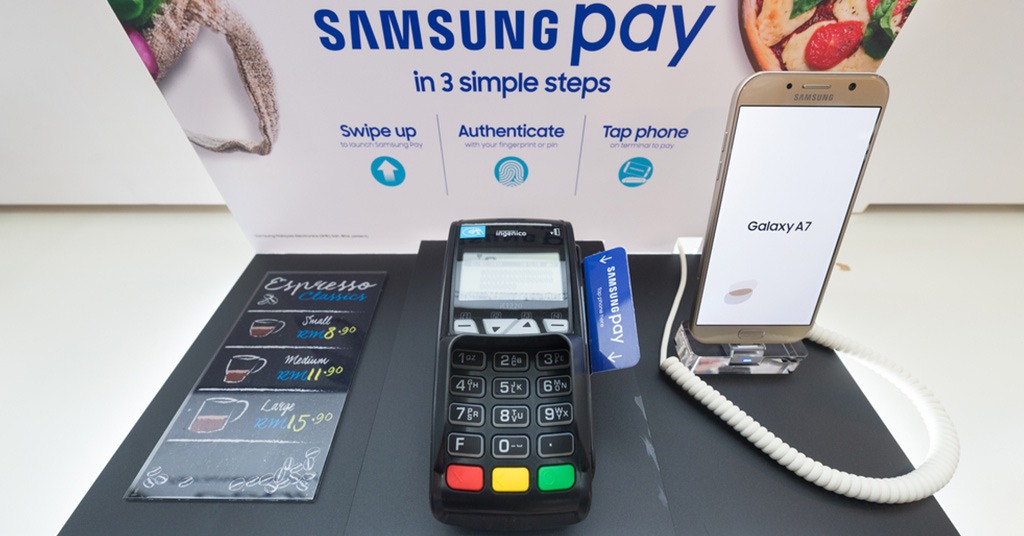 Nevertheless, societies all over the world are still getting used to this new technology. People still have their doubts and fears, or just don’t see a difference between credit card and mobile phone usage. Samsung is not giving up, though. Their incentives to encourage mobile payments include a lot of special offers and rewards. Many new functions and integration with other Samsung devices are slowly gaining new followers.

In addition, Samsung devices may also become payment accepting terminals themselves. In partnership with Mobeewave, the users of Samsung flagship devices such as Galaxy S7, Edge S7, S8, S8+, and Note 8 can get access to the mobile payments without any POS terminals. The payers can utilize both a contactless card and a mobile wallet. Either way, the transaction is secure and protected by encryption. 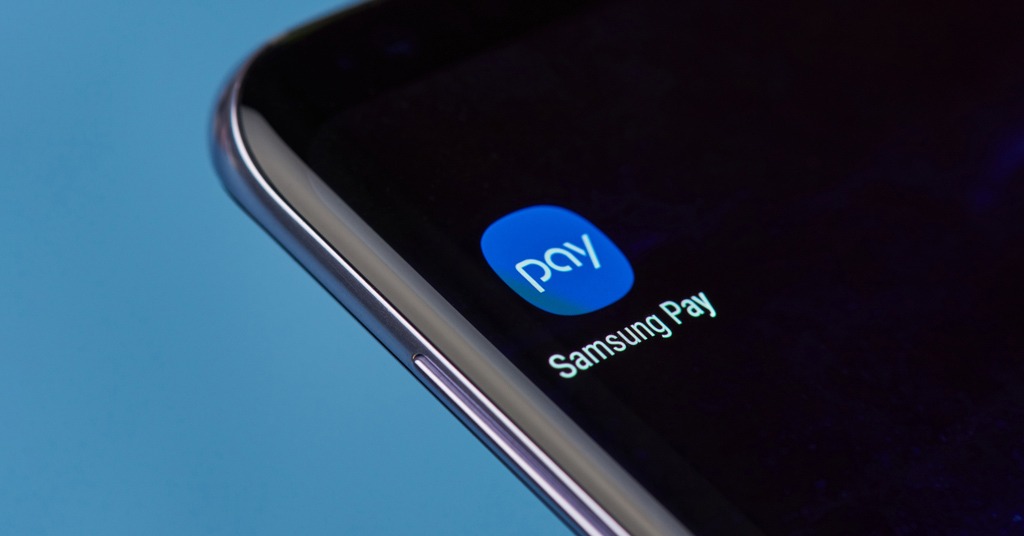 The payers can utilize both a contactless card and a mobile wallet. Source: shutterstock.com

The company is also expanding the limits of traditional mobile wallet usage, combining them with the IoT. For instance, partnering with MasterCard and MyWebGrocer, they developed a grocery app integrated right into a refrigerator. The Groceries app is pre-installed in Samsung’s Family Hub fridge by default.

The 2016 US headlines burst with the news of an unusual smart refrigerator with a shopping app right at one’s fingertips. The grocery app includes various available shops and potentially will cooperate with local restaurants as well. The app may also make suggestions about the list of needed products based on the shopping history, planned arrangements etc. The owners need no longer worry that they will run out of milk or vegetables. They will not forget to buy the essentials, as they can make an order immediately. They also don’t risk buying excessive food, falling for the marketing tricks used by retailers. The shopping cart is really convenient as it combines all the stores available. The potential unauthorized ordering by children or guests is prevented by a confirming pin code requirement. By the way, the app accepts all valid credit or debit cards issued in the USA. Although this technology is only beginning to develop, it shows the potential of synergy between the financial sector and domestic appliance producers.

Another innovation of the fridge is its smart cooling system. The family will no longer squeeze the products into either the fridge or freezer. They can simply change the designation of the compartment if needed. The temperature may be specially adjusted to cool down drinks, or softly chill meat or fish which will be prepared soon.

The large touchscreen may also retransmit the video from the Samsung Smart TV, play music, display notes, recipes, remind about events and be used as a time manager. In perspective, Samsung aims to ensure all its devices are smartly connected and can be efficiently used for the utmost in owner convenience and flexibility. For instance, the fridge may be paired up with a thermostat, security cams, entrance door intercom, or even a baby monitor. Housewives will surely appreciate the possibility of controlling everything around the house while they are cooking and watching their favorite movies 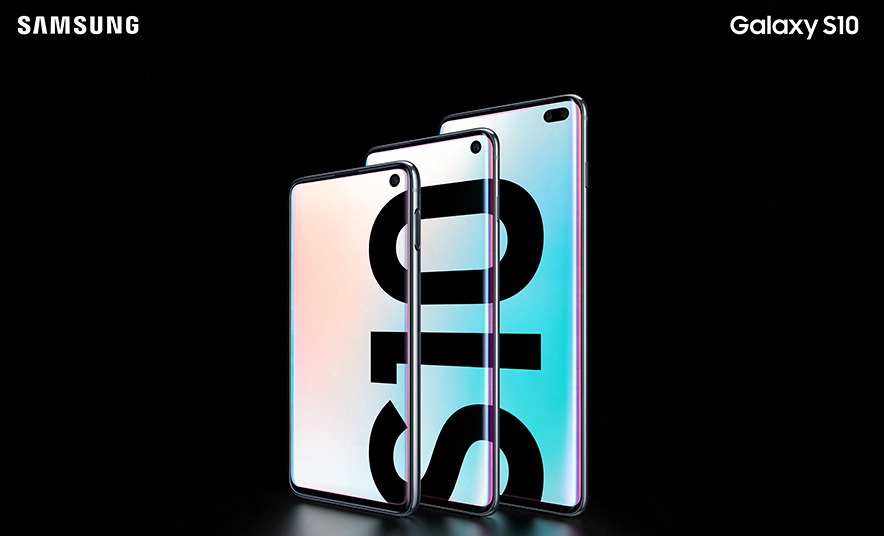 The new products have an incorporated NFC module for working with the Samsung Pay system. Source: news.samsung.com

The main feature expected to rock the mobile world with the launch of Galaxy S10 is the octa-core processor Exynos 9820. The high computational power and the added speed of the data transmission of up to 2 Gb per second allow the phone to function in the most advanced 5G networks. Although they are not yet available in all countries, it surely is the technology of the future. Users all over the world wish to be prepared, especially considering the speed of innovation spreading globally nowadays.

The Limited Edition Samsung Galaxy S10+ is announced to come into the market a bit later in March. Customers are already eager to test its expected 12 GB of operational memory and 1 TB of internal memory. Customers with a limited budget may enjoy the economic version of this flagship device.

The new products have an incorporated NFC module for working with the Samsung Pay system. The NFC feature can also be used for exchanging information with other devices as well as read product data encoded in NFC tags. The latter may be found in advertising, announcements, and even business cards. The information stored ranges from web-links to contact details. 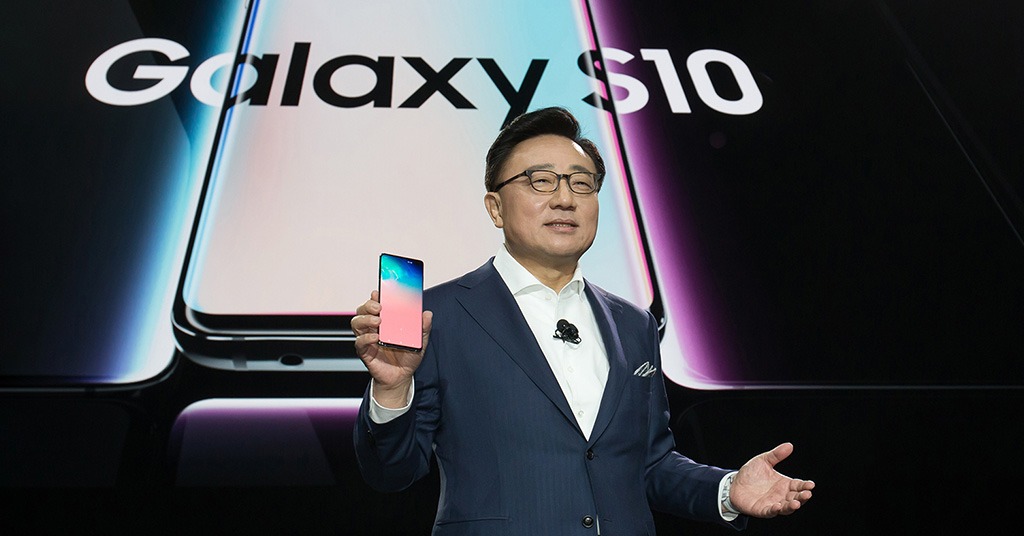 The display features an ultrasensitive fingertip scanner for secure and quick personal identification. The phone allows 3D face image scanning. The ceramic case is supposed to make the phone waterproof. The display is protected by a new upgraded version of Gorilla Glass.

Education becomes more flexible and remotely available due to the range of products by Samsung. Both students and professors can benefit from incorporating innovative technologies into the learning process. The company invests a lot in education by bringing the best technologies to the classroom and encouraging young people to foster innovation.

The digital literacy program created in partnership with Pearson encourages students to improve their reading comprehension skills. Samsung Chromebook and Galaxy Tab are the hardware products required, while Pearson iLit serves as a quick solution for reading development. The program enables a personalized approach to every student’s reading skills and needs. iLit uses initial testing and survey to determine a student’s language level and their areas of interest. It will then automatically choose suitable reading material from among thousands of texts. ESL foreign students will appreciate the translation options and vivid picture dictionaries.

Furthermore, Samsung technologies are deeply incorporated into the STEM (science, technology, engineering, and math) learning all over the USA. Not only are their learning devices and resources useful for fun interactive curriculums, but also the company constantly promotes the implementation of STEM ideas. The Samsung Solve for Tomorrow Contest is a chance for every classroom nationwide to make a contribution to the well-being of their local communities. Participating students develop apps, use VR technologies and 3D printing to bring elegant solutions to everyday problems. The best teams are rewarded with monetary prizes and new digital equipment for their classrooms.

Samsung Galaxy and Gear watches are available in many designs appealing to both men and women, business people and athletes. They are a great alternative to numerous mobile apps, featuring all-in-one vital options in a compact form, and being always within one’s reach. 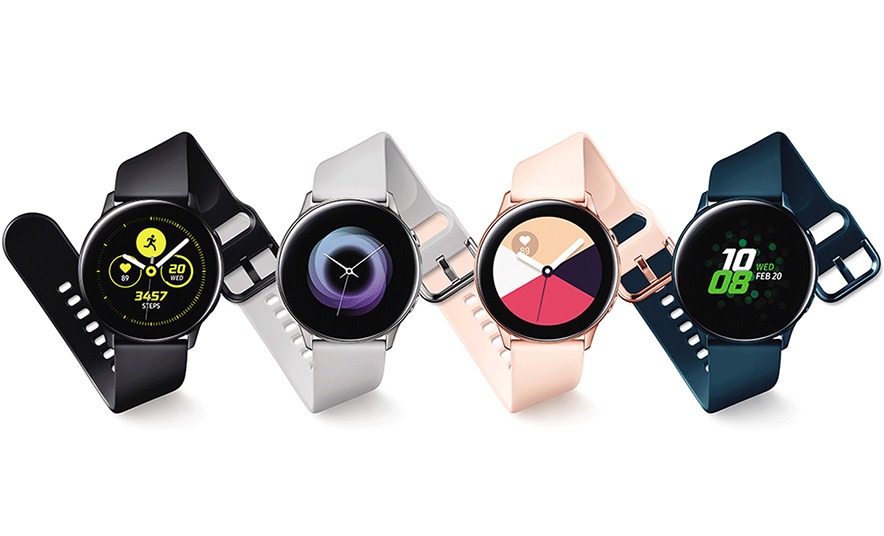 The Galaxy watch can replace a true personal assistant as well. Source: news.samsung.com

The batteries of their smartwatches are quite durable. Even in the Always On Watch mode, the Galaxy models can work for 30 hours straight without recharging.

The Galaxy watch can replace a true personal assistant as well. Except for the set reminders, it also prepares a daily summary. It keeps track of the owner’s sleeping patterns to give timely reflection data on the day that has passed just before the usual bedtime. The briefing includes health and fitness results as well as the remaining reminders.

Recently the company has announced a brand new project. Samsung is opening a robotic department and has already presented some demo samples of their designs.

In particular, the company is working on three kinds of service robots and an exoskeleton for humans to wear. Although those might be just on the stage of elaboration, their design and expected functions are impressive.

Bot Care is designed for facilitating the healthcare process. It will be especially helpful for the elderly who often forget about taking prescribed medicines or planned procedures. Apart from timely reminders, it should be able to monitor their vital health stats, as well as perform the role of a fitness trainer. Since its main target audience is senior people, the workouts will be limited to yoga or Pilates so far. The robot will also dial 911 in case of an emergency, which is perfect for people living alone.

Bot Air is meant to check the air quality in the room and clean or humidify it if needed. Bot Retail is basically a combination of an interactive ordering panel and a robotic waiter. The exoskeleton is a lightweight model of robot pants. Once you put them on, you almost don’t feel them. Nevertheless, they help people walk, gently lifting the legs step by step. It is especially helpful for people with injuries, senior citizens, or those on rehabilitation. Perhaps, when it comes to the mass market, other uses will be discovered as well.

Currently, the robotics developments are just draft projects, so the public impatiently waits for their real-life production.

Samsung has continuously expressed its interest in blockchain too.

Last autumn they took part in the cooperative project to launch a pilot based on blockchain technology. Together with ABN AMRO, the Port of Rotterdam Authority, they started to implement blockchain technologies into international logistics. This decentralized system will allow separate parties involved to join their efforts without enormous paper documentation. At present, physical transportation services, authorities legalizing the transfer, and the business partners paying for the goods do not consolidate their actions on a proper level. Samsung and its allies aim to bring together work of several blockchains, uniting them with an overarching system. 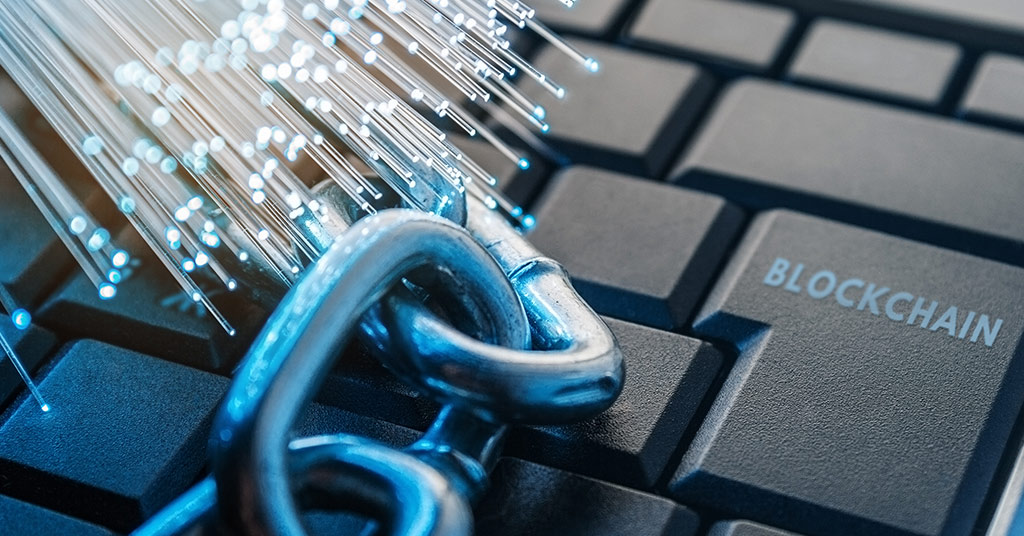 Samsung has continuously expressed its interest in blockchain too. Source: shutterstock.com

This year, Samsung has signed three different patents to incorporate blockchain technologies into their own mobile devices. The company believes those are the best storage for cryptocurrencies, being always within reach, portable, secured by new fingerprint or face scanners, and having isolated TEEs (Trusted Execution Environments).

Samsung believes TEEs are safer than traditional cold storages. TEE is isolated from the operating system, so all the financial operations that take place there are more protected from possible changes. Mobile wallets are gaining popularity, so the company aims to add them to their latest line of Galaxy phones.

Moreover, Samsung is going to produce ASIC mining chips, potentially lowering the cost of mining equipment while exceeding in quality. They have already signed a contract with the Canadian cryptocurrency mining firm Squire.