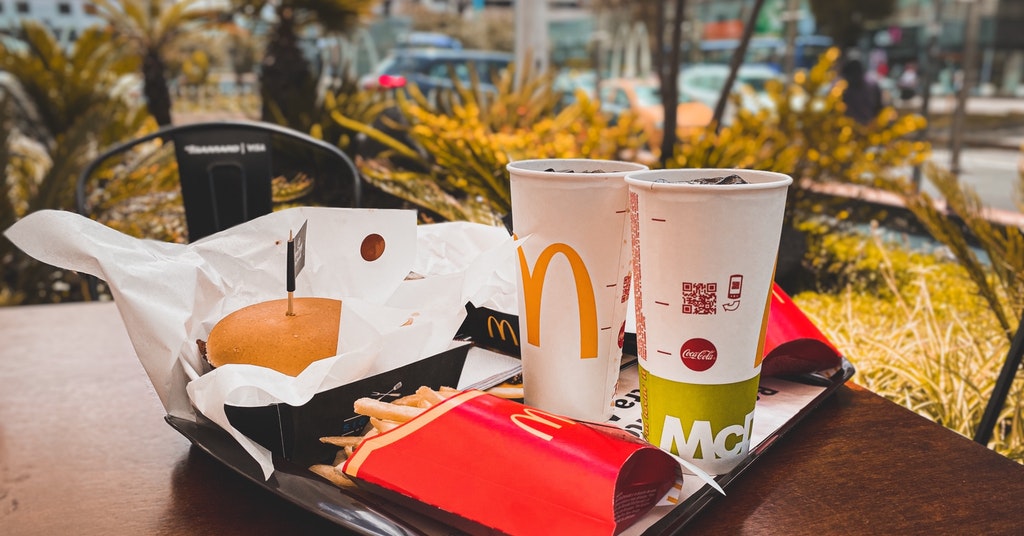 Whether you’re lovin’ it or not, McDonald’s has been around for over 70 years. It’s probably the first brand that comes to mind when you think of fast food and it’s not a coincidence. With 38,695 restaurants worldwide, the pioneer of the quick-service concept is the largest and the most profitable fast-food chain globally.

1955 – Ray Kroc, impressed by the concept, becomes their franchise agent. He opened the first McDonald’s franchise in Des Plaines, Illinois. He also launched the McDonald’s Corporation in the same year.

1961 – Kroc buys out the McDonald brothers’ business share for $2.6 million. His competition soon becomes so strong that the original restaurant is forced to close. Now there’s a McDonald’s museum in the building.

1962 – McDonald’s introduced its now world-famous Golden Arches logo. It originated from the looks of the original restaurant designed by Stanley Meston. Its flat roof was furnished with the eye-catching half-arches painted in neon yellow. Later the symbolic arches were brought together in the world-famous logo resembling “M” for McDonald’s.

1963 – the company introduced a brand figure Ronald McDonald, a red-haired clown designed to appeal to children. Throughout the years, the clown figure has been heavily criticized for advertising unhealthy food to children, plus it didn’t fit into modernized dining rooms. This mascot was officially retired in 2016 after a series of “creepy clown sightings” popped up across the US.

1970s – McDonaldland Parks (Play Places) and the Drive-Thru were added to the restaurant layout.

1984 – Ray Kroc, the Founder and Senior Chairman of the Board of McDonald’s Corporation, dies.

1993 – the world’s first McCafé opens in Melbourne, Victoria Australia. This coffeehouse-style food and beverage chain spread worldwide. It now is one of the leading players in the European coffeehouse market, behind Costa Coffee and Starbucks. Germany ranks as the biggest market for McCafé: the brand had 850 shop units operating in Germany as of January 2018. McCafé also has a larger presence in Germany than coffeehouse giant Starbucks.

2003 – McDonald’s first global ad campaign, “I’m lovin’ it” is launched in Munich, Germany. Eight months after launch, McDonald’s proclaimed the campaign a success and launched 13 new ads that would run around the world. According to research it conducted, total advertising awareness of the “I’m lovin’ it” campaign in its top 10 countries has hit 86% overall, including 89% among young adults and 87% among mothers.

2017 – Global McDelivery Day is celebrated on July 26 to support the global launch of McDelivery with UberEATS. McDelivery was then available from more than 7,800 restaurants in 47 countries, and about 4,200 of them were served by UberEATS.

Despite fierce competition and nutritionists leading campaigns against fast food, McDonald’s regularly reports tens of billions in annual revenues. It’s also by far the most successful franchise in the world. Such huge popularity stands on just a few supporting pillars.

McDonald’s is always ahead of its competitors when it comes to innovative solutions. Whether it’s technological solutions or new menu items, the company is open to change. For instance, amidst the pandemic turmoil, the fast-food chain almost immediately started testing new experimental social-distancing designs in its European locations.

An utter intention to innovate and improve the existing processes existed in McDonald’s right from the start. As John F Love wrote in his book “McDonald’s: Behind the Arches”, the McDonald brothers worked with a local craftsman to invent a new kind of spatula, a new dispenser that squirted the same amount of ketchup and mustard every time, and a rotating platform to speed up the process of assembling of burger, bun, and condiments. Those were innovative technologies for the time being, and though every decade brings new challenges, the company is ready to face them with a proactive approach.

Last year, McDonald’s invested in data-driven meal choices for its drive-through ordering panels. AI algorithms developed by Israeli start-up Dynamic Yield can automatically change menus depending on the weather, time of day, and traffic. Loyal customers could also appreciate the opportunity to be automatically offered their favorite or usual meals. It’s made possible by AI number-plate recognition.

Furthermore, the company announced it was going to replace human servers with AI voice-based technology in its US drive-throughs. Hence, its American customers would soon be dealing with completely automated and customized self-service checkouts.

Previously, McDonald’s introduced touchscreen self-service kiosks in thousands of its locations, as well as tested robotic deep-fryers. All those innovations are helping the business to speed up service time, relocate staff’s focus from taking and making orders to serving customers, save some money on operations, customize its menus, and boost sales. So far, it all works really well.

Corporate values are as important as the food service itself. As a company, McDonald’s strives to promote flexibility, opportunity, equality, and development. According to its new CEO Chris Kempczinski, “This is a people business and it’s really about all of you.” The restaurant chain is known to give job chances to people from all walks of life and with various levels of experience. McDonald’s restaurants offer a variety of career development opportunities, ranging from world-class training programs to high school completion courses to college tuition assistance.

It also collaborates with the AARP Foundation that works to end senior poverty by helping vulnerable older adults build economic opportunity and social connectedness. In addition to posting its jobs on the AARP Job Board, McDonald’s is also implementing a pilot program to help older adults return to work after they have been out of the workforce due to caregiving responsibilities or for other reasons. “For the first time ever, five generations are now working together under the Arches,” says Melissa Kersey, McDonald’s U.S. chief people officer.

The hiring process at McDonald’s fosters a collective culture by selecting candidates who are willing to put the good of the organization ahead of individual ambition. McDonald’s employees are aware of the company culture, which favors homegrown leaders over those hired from outside. Instead of utilizing offsite leadership development programs at prestigious universities as many other companies do, McDonald’s runs its own. Therefore, the corporate executives predominantly come from within, knowing all the ropes in the business. As an example, James A. Skinner, a former head of the company has had a brilliant 41-year career at McDonald’s – from flipping burgers to managing the corporation.

Mike Abramson, the president of the national fitness franchise D1 Training, is proud to have chosen McDonald’s as his first workplace. He has learned a few important life lessons there that ultimately brought him success in other fields:

As you can see, the air of optimism and resilience prevails on McDonald’s premises. This is one of the factors helping the company to survive and prosper.