The global spread of the pandemic ravaged the world’s economy and the Australian economy was no different. Due to the novice nature of the crisis the world’s markets and economies panicked, resulting in worldwide lockdowns, together with a strong bearish sentiment in the capital markets. However, after a while as things started to clear out, the phenomena of structural change in the composition of economies were accelerated, whereby technology companies fared well and saw their revenues skyrocket compared to traditional ventures that witness bankruptcies at worst. Moreover, these structural changes manifested in the rising role of start-ups together with increasing market capitalisation of technology companies at the bourses.

As far as the composition of the economy is concerned, the services sector accounts for 66.15% of GDP whereas manufacturing and agricultural sectors contribute 25.2% and 2.09% respectively.

Australian economy outlook for 2021 and beyond

The IMF (International Monetary Fund) has recently upgraded the Australian economic outlook and stated that it is expected to grow by 4.5% this year and 2.8% in 2022. Earlier the Washington-based institution projected the Australian economy to expand by 3.5%. However, the fund also maintains that this recovery is largely dependent on the vaccination rollout.

The government has identified the following structural reform priorities in order to boost the productivity of the economy.

It is worth noting that RBA has reduced the cash rate by a cumulative 65 basis points to a record low of 0.1% since the advent of COVID-19, and this rate is expected to remain just above zero till 2022. There is no possibility of a rise in inflation as lower wage growth is expected to tame the rising prices of goods and services. However, house prices might go up as a result of this. In its recent report, the central bank stated that a 100-basis-point cut in interest rates might increase housing prices by 30% after about three years.

Additionally, as per poll forecasts, consumer prices are projected to rise by 1.5% this year and by 1.7% in 2022. This inflation rate is below the RBA’s threshold of 2% to 3%. Wage and price growth in the Australian economy has been largely tamed for decades, and this is expected to continue for the foreseeable period.

It is noteworthy that in the third quarter, Australian wages grew by just 0.10% and this is the slowest pace historically, thus hurting household spending. According to Michael Every, global strategist at Rabobank: “No one really understands how bad the underlying picture is, because no one’s pulled away that plaster yet. If you think zero real-wage growth and house-price growth of 10% is good news, then everything is looking great, and if you don’t, then everything’s looking pretty rocky,”.

We have used the ASX 100 index to gauge the performance of Australia’s stock market performance. ASX-100 is composed of both large and mid-cap companies and represents approximately 74 percent of the overall equity market capitalisation. The index is well diversified with all 11 GCS sectors represented. However, financials and materials dominate the index as they reflect 39% and 16% of the total index market capitalisation. 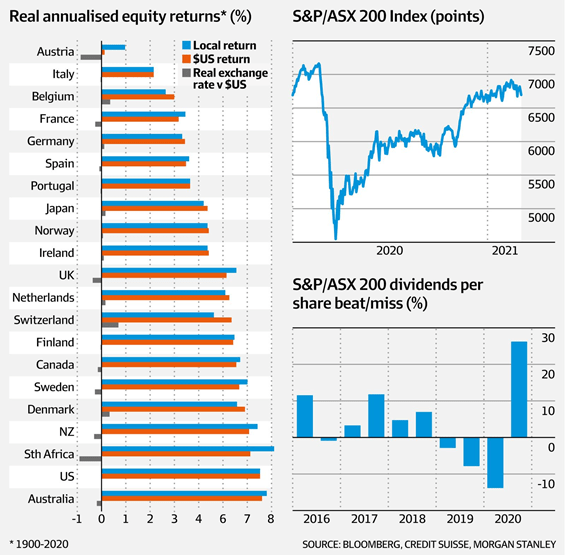 In its recent performance, ASX gave an overall return of almost 30% in 2020 whereas its Year-to-date (YTD) return for 2021 is 6.57 per cent. According to Mr. Davis from Credit Suisse: “The year 2020 was an extraordinary year for investors. Market volatility and volumes hit extreme levels, higher even than in the global financial crisis.” With this backdrop, Australia has consistently been among the world’s best-performing markets.

Going forward, the concerns related to inflation and re-rating to global technology stock are expected to dominate the performance of ASX. However, with surprises in earnings together with tamed inflation rate is projected to take the index to the new highs.

Conclusion
To conclude, we reiterate that the performance of the Australian economy and the stock exchange are largely dependent on the successful roll out of the vaccine process. Further, it is no doubt that the expansionary fiscal and monetary policy adopted by the government and the central bank respectively is expected to provide much-needed stimulus to the overall economy. On top of that the ambitious reform agenda of the government to improve the productivity of the country is going to be a catalyst for the future economic growth of Australia.