This businesswoman is also involved in modern German politics 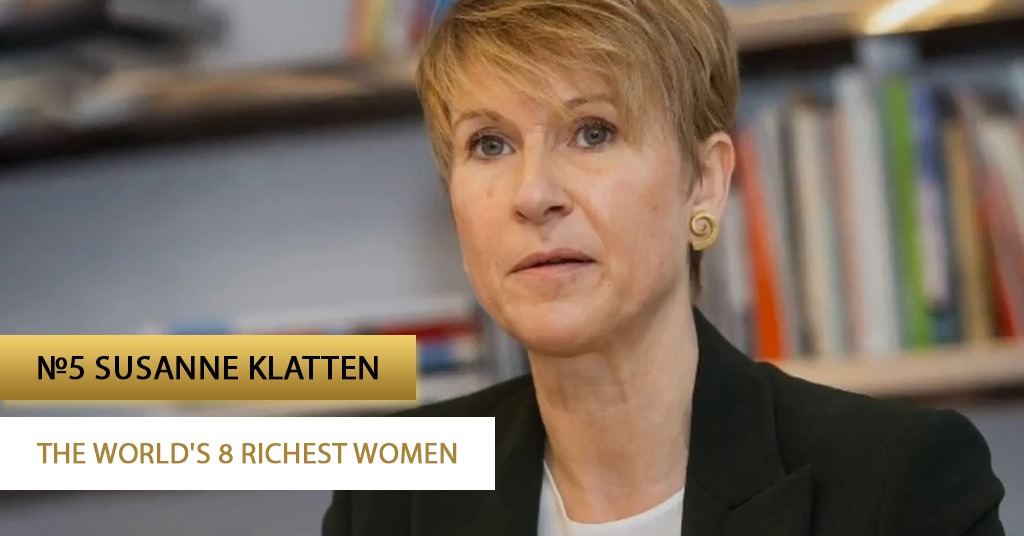 Today we want to tell you about a woman whose all-round knowledge and experience have helped her build a successful business profile.

Susanne Klatten is less than half a billion behind Yang Huiyan (which we’ll say more about tomorrow) in her net worth. Following the tradition of the richest women, she is also an heiress of most of her wealth.

After her father’s death, Klatten inherited 12.50% of the shares in BMW as well as a 50.1% stake in the pharmaceutical company Altana. The latter is one of the biggest chemicals producers in Germany, and a major global player in their sphere. Being a good MBA professional, Susan helped to carry out major organizational changes in Altana co-owned by her family. Today she is the company’s sole owner and a deputy chairperson. Klatten is also the owner of SKion GmbH, an investment company formed in the course of the divestment of Altana AG’s pharma activities. Her other portions of shares include carbon producer SGL Carbon, credit card maker Entrust Datacard and turbine developer Nordex.

Klatten has a diverse working experience. She had her internship at the BMW department where she met her future husband. She worked for the German advertising agency Young & Rubicam, Dresdner Bank in London, The German division of McKinsey & Company management consulting firm, and the private bank Bankhaus Reuschel & Co. Her education degrees also vary from business finance to advertising, marketing, and management. This all-round knowledge and experience have helped Klatten build a successful business profile. She continues to wisely manage and multiply the assets she inherited.

The story of family wealth is long and complicated. It began with Susan’s great-grandfather, Emil Quandt whose textile factories became highly profitable during World War I. Later the family purchased many small businesses, building the powerful Quandt business group. Susan’s father, Herbert Quandt, became famous for saving BMW on the verge of bankruptcy. His bold decisions led to significant improvements and eventual success.

The history of the Quandts’ activities is not spotless. Historical studies associated this family with the Nazi regime. That is no surprise for major German businesses during the period of Adolf Hitler’s rule to collaborate with the authorities. However, the family had very close ties with the Nazis. They were influential members of the ruling party and contributed to the needs of the army. In 2011, the family members admitted taking over Jewish businesses and using slave labor at Quandt factories. The slaves were brought from concentration camps and produced ammunition and military hardware for the Nazis. There is a German TV documentary “The Silence of the Quandt Family” revealing the ugly facts of slavery work and execution. In 1946, when Günther Quandt (Susan’s grandfather) was arrested and tried, these facts were unknown. The judges released him and he continued to build his business.

Susan Klatten herself is also involved in modern German politics. She openly supports the Christian Democratic Union, the center-right political party headed by the German Chancellor Angela Merkel. Their generous family donations to the party were largely criticized by the public.

In 2013, the major BMW stakeholders were accused of lobbying their personal interests. Their donation time strangely coincided with Merkel’s refusal to support the EU’s environmental initiative. This was supposed to set much tougher carbon-dioxide emission targets for passenger cars in 2020. Obviously, the BMW business would be strongly affected by this reform. This event cast shade both on the political integrity of the party and BMW corporate values.